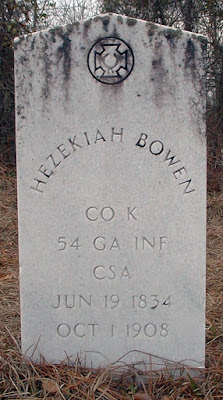 Hezekiah served in Company K of the 54th Georgia Infantry during the War of the Rebellion. His compiled service record only has 7 pages. Hezekiah is not listed on the Amnesty Papers of Georgia. As far as I can determine (after two serious searches of the records), Hezekiah never applied for a pension from the state of Georgia for his service.

Hezekiah was a farmer for most of his life, but according to another family member, he did work as a laborer gathering turpentine for Richard J. Madray when he lived in Wayne County, Georgia.

Hello...very interesting. I love reading your blog and your writings. Hugs, Patty

Hezekiah Bowen was my g grandfater. Samuel J. Bowen was born in 1860 in Bulloch County a couple of miles from Poplar Springs Baptist Church (founded 1853 and locatd NE of Portal)where he attended church and he is buried there in the Bowen area along with my mother (Aleatha Sparks Bowen) and my dad (James Mathew Bowen, Sr.) along with two of my siblings (Max J Bowen and an unamed sister that died at birth), my grandfather Samuel J. Bowen, his two wives, and several of their children. I drive from Statesboro on Sunday and Wednesday to attend church there and I will be buried there in a different Bowen location set aside for my brothers, their spouses, and me.

Thanks for this great information. Very recently several of my family members went down to photograph g grandpa's grave.

N. Luree Bowen (divorced and went back to maiden name).