Copyright 2017, CABS for Reflections From the Fence

As found at the Library of Virginia website, Chancery Cases, Case  1816-040. Slave names highlighted in red. For copies of your own that are less pixelated, download from the Library of Virginia, they will be much better.  This file was particularly difficult for me to transcribe, please feel free to send corrections.  It has been my experience that the Chancery cases are not always presented in chronological order, some cases appear to have been filmed backwards, the first document, actually being the last.  I am presenting the documents here in order presented on the web site. 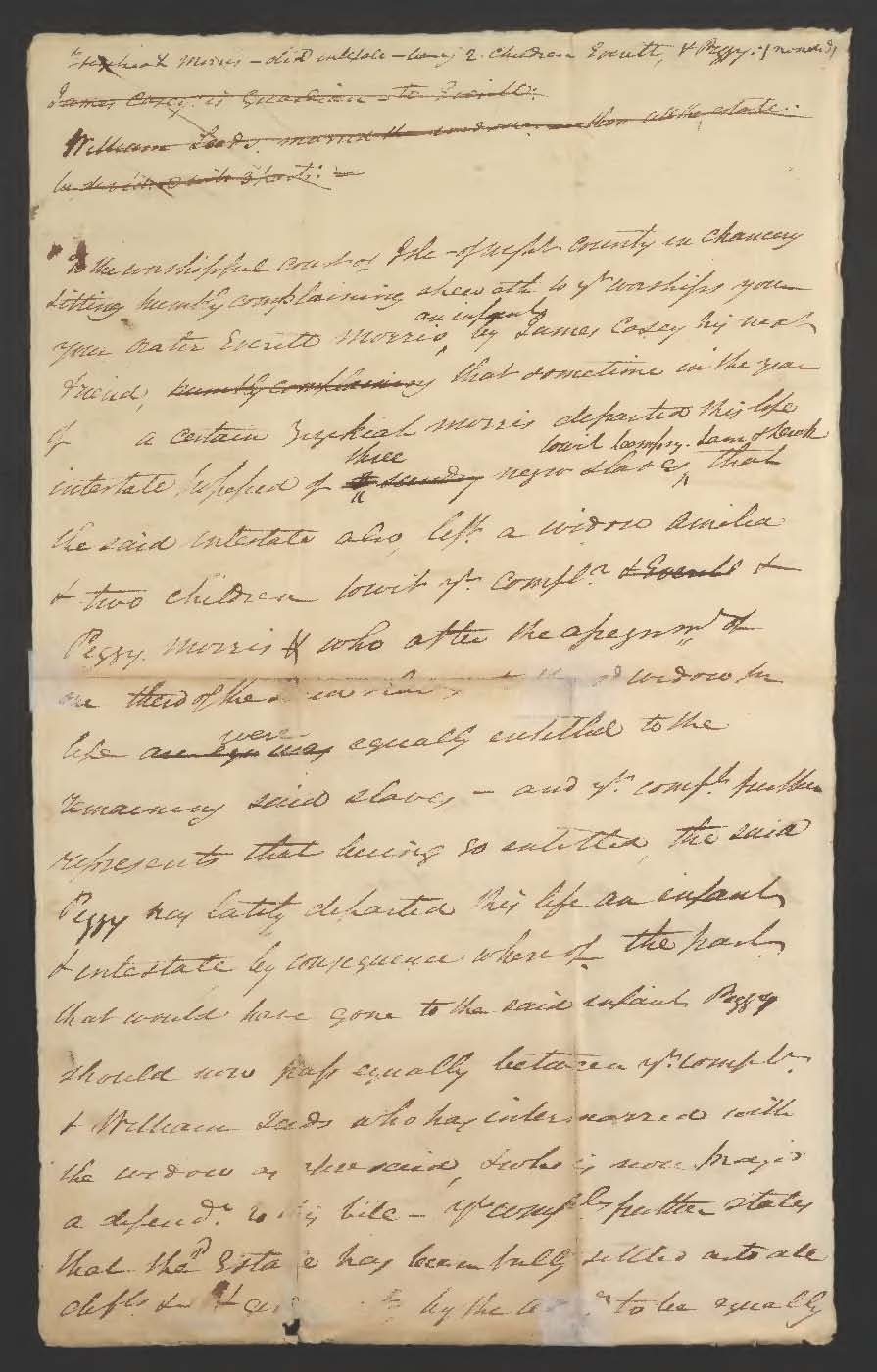 (No longer lined out)
To the worshipful court of Isle of Wight County in chancery sitting hereby complaining ???? ??? to yr worships you your orater Everitt Morris an infant by James Casey his next friend (lined out: humbly complaining) that sometime in the year of a certain Hezekiah Morris departed this life intestate possessed by three (lined out ??????) negro slaves to wit Dempsy, Sam & Dick, that the said intestate also left a widow Amelia & two children to wit yr complr (Lined out & Everitt) & Peggy Morris who after the assessment of one third of the ??? ??? ?? ????? widow her life (lined out ??????? way) were equally entitled to the ?ernacncey? said slaves - - and yr complt further represents that being so entitled, the said Peggy has lately departed this life an infant & intestate by consequence where of the part(y) that would have gone to the said infant, Peggy, should now pass equally between yr complt & William Seeds who has intermarried with the widow a? ????? ???? ?????? a defend To th?? Bill Yr compl further states that the estate has been fully settled and all debts ????? ????? by the ???? to be equally 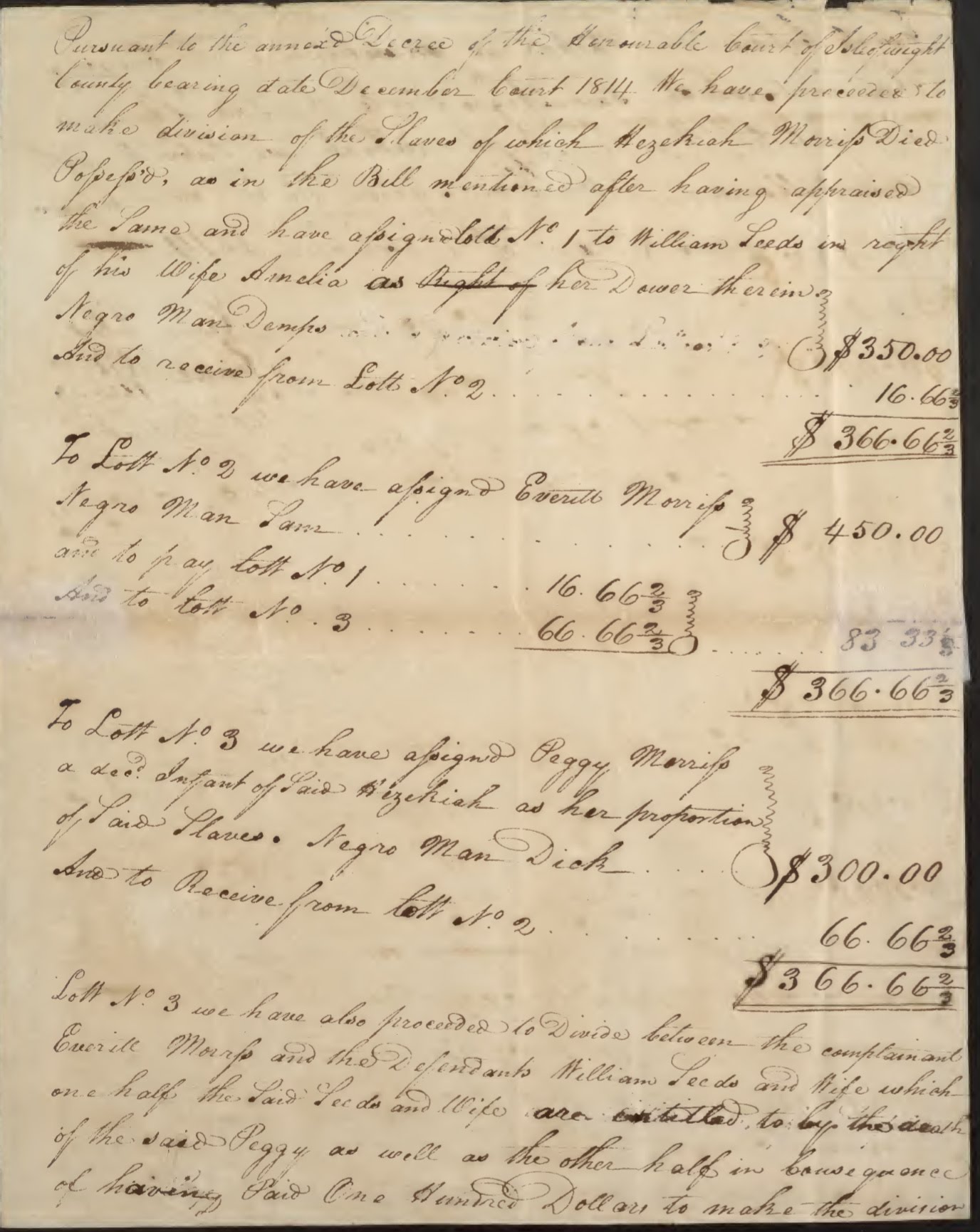 Pursuant to the ammended Decree of the Honorable Court of Isle of Wight County bearing date December Court 1814 We have proceeded to make division of the Slaves of which Hezekiah Morris Died Possessed, as in the Bill mentioned after having appraised the Same and have assigned

Lott No. 3 we have also proceeded to Divide between the complainant Everitt Morris and the Defendants William Seeds and Wife which one half of the land Seeds and wife are entitled to by the death of the said Peggy as well as the other half in consequence of having paid One Hundred Dollars to make the division 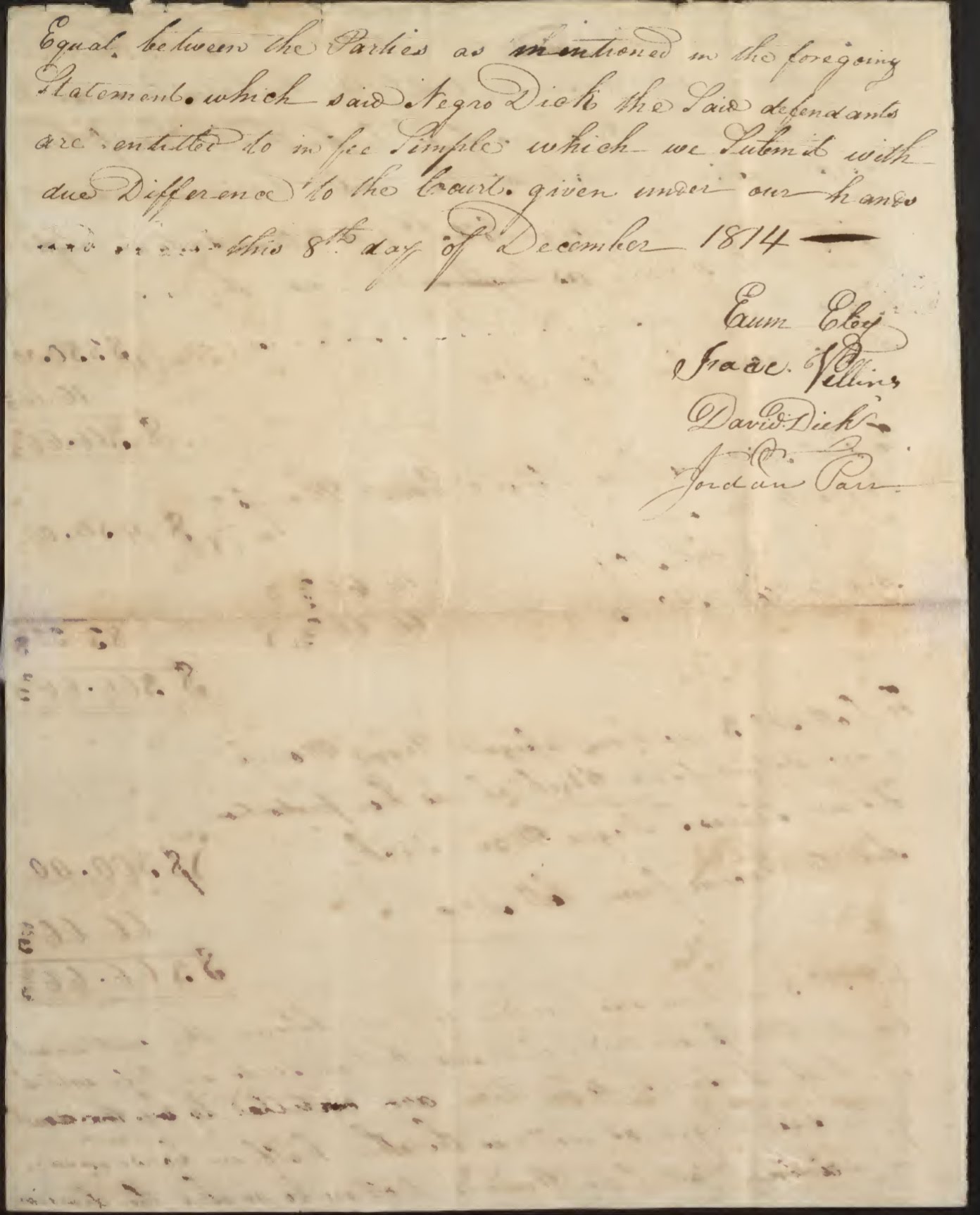 Equal between the Parties as mentioned in the foregoing Statements which said Negro Dick the Said defendants are entitled to in fee Simple which we Submit with due Difference to the Court, given under our hands and ??? this 8th day of December 1814 - - 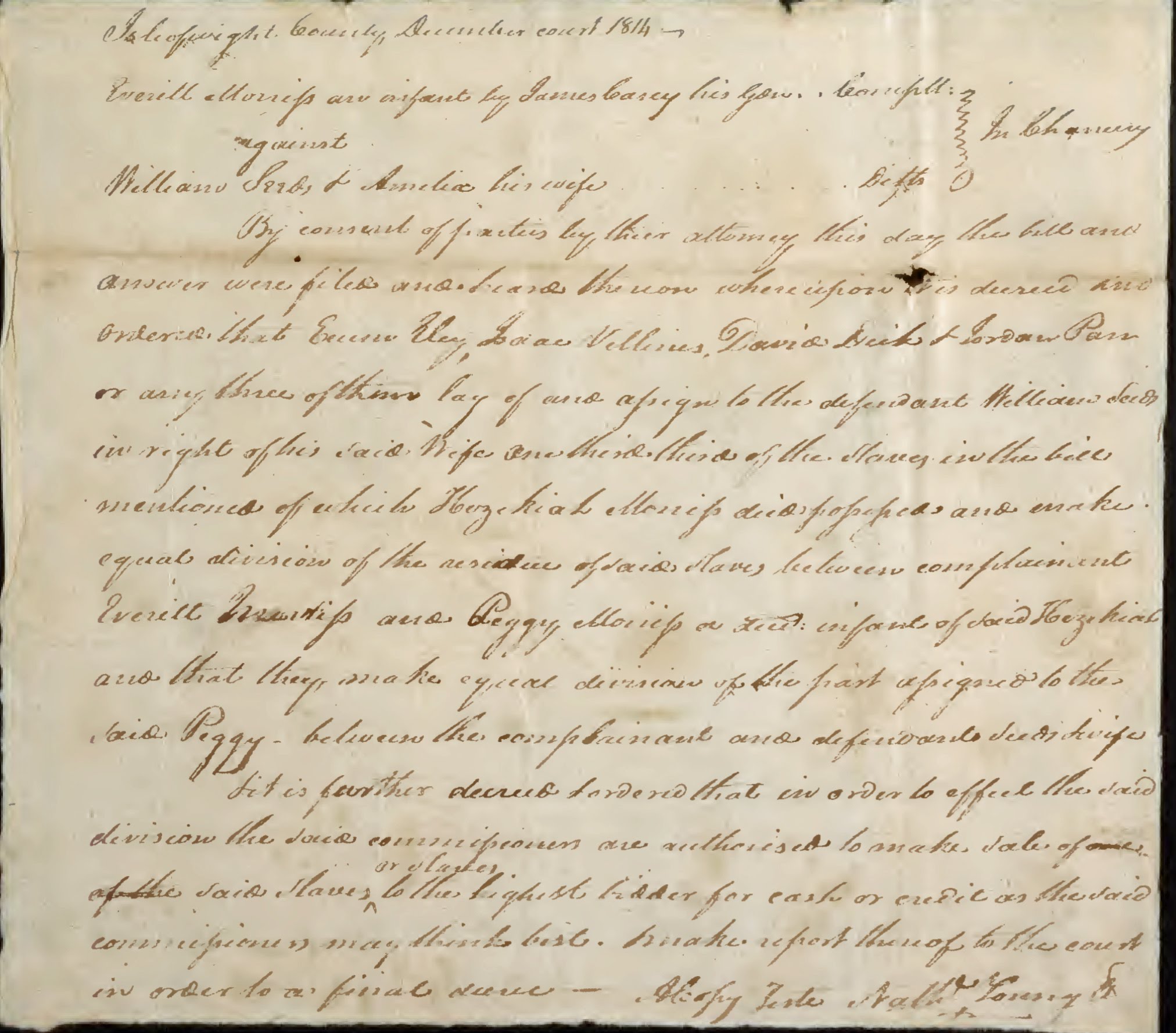 By consent of parties by their attorney this day this bill and answer were filed and heard the ??? where upon this decree and ordered that Exum Eley, Isaac Vellines, David Dick & Jordan Parr or any three of them lay of and assign to the defendant William Seeds in right of his said Wife one third third of the slaves in the bill mentioned of which Hezekiah Morris died possessed and make equal division of the residue of said slaves between complainant Everitt Morris and Peggy Morris ?? ??? (looks like or decd) infants of said Hezekiah and that they make equal division of the part assigned to the said Peggy - between the complainant and defendants Seeds & wife It is further decreed & ordered that in order to effect the said division the said commissioners are authorized to make sale of ????? (of the - - which is lined out) said slave or slaves to the highest bidder for cash or credit as the said commissioners may think best. Make (?) report thereof to the court in order to a final decree - - Al???? Teste Nathl Young

Good luck in your research.

.
Posted by Carol at 8:22 PM No comments: Links to this post 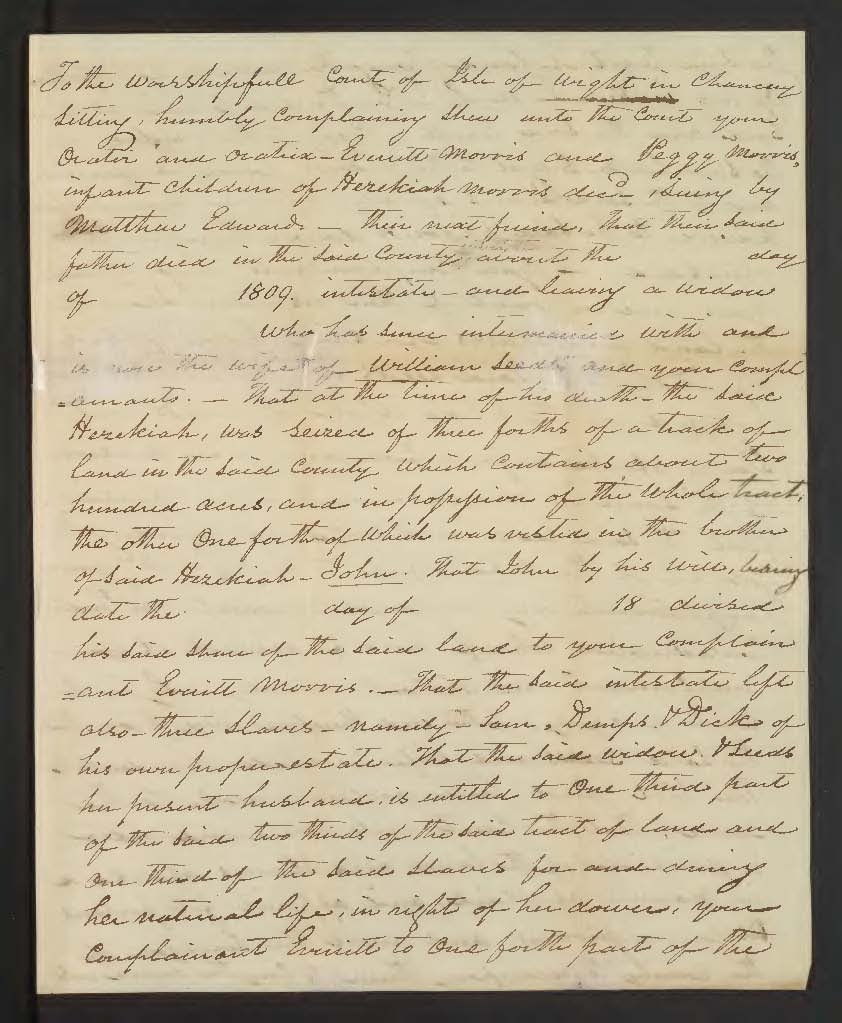 To the Worshipfull Court of Isle of Wight in Chancery sitting, humbly complaining ???? unto the court your orator and oratrix - Everett Morris and Peggy Morris infant children of Hezekiah Morris decd, Suing by Matthew Edwards - - their next friend, that their said father died in the said county about the day of 1809. intestate - - and leaving a widow who has since intermarried with and is now the wife of William Seeds and your complainants. That at the time of his death the said Hezekiah, was seized of three forths of a track of land in the said county which contains about two hundred acres, and in possession of the whole tract, the other one forth of which was vested in the brother of said Hezekiah - - John. That John by his will, bearing the date the day of 18 devised his said share of the said land to your complainant Everitt Morris - - That the said intestate left also three slaves - - namely - - Sam, Demps & Dick of his own proper estate. That the said widow & Seeds her present husband, is entitled to one third part of the said two thirds of the said tract of land and one third of the said slaves for and during her natural life, in right of her dower, your complainant Everitt to one forth part of the 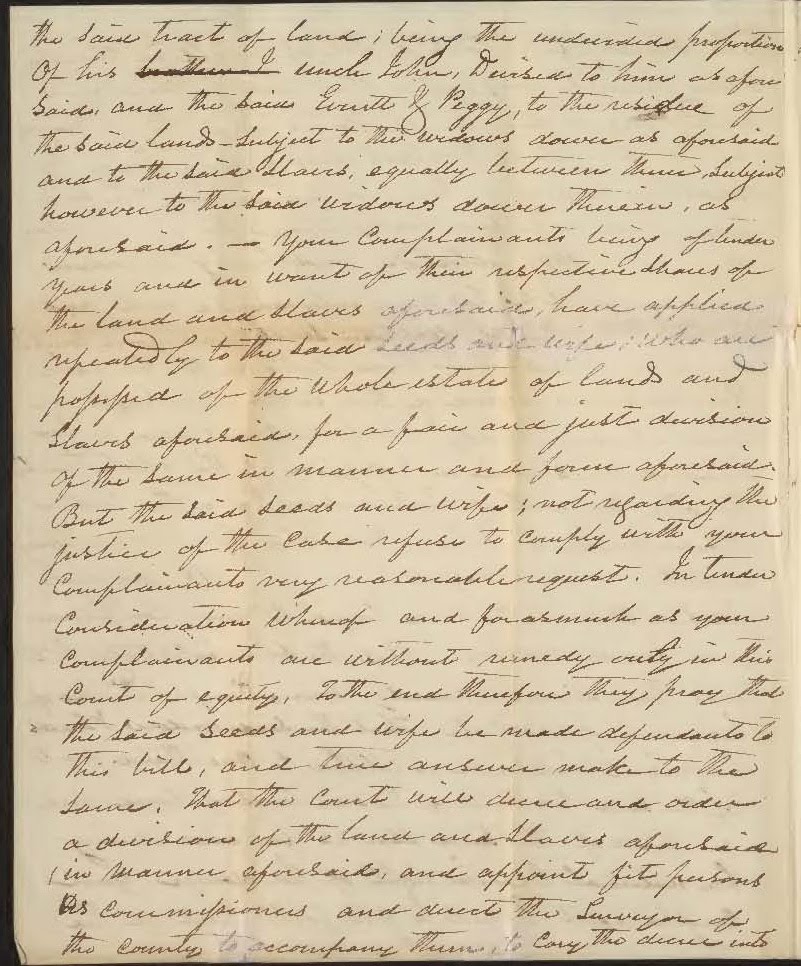 The said tract of land; being the under??? proportions Of his (brother - word crossed out) uncle John, Devised to him aforsaid, and the said Everitt & Peggy, to the residue of the said lands subject to the widows dower as aforesaid and to the said slaves, equally between them, subject however to the said widows dower therein, as aforesaid.- - Your complainants being of under years and in want of their respective shares of the land and slaves aforesaid, have applied repeatedly to the said Seeds and wife & who are possessed of the whole estate of land and slaves aforesaid, for a fair and just division of the same in manner and form aforesaid. But the said Seeds and wife; not regarding the justice of the case refuse to comply with your complainants very reasonable request. In tender consideration whereof and forasmuch as your complainants are without remedy only in this court of equity, to the end therefore they pray that the said Seeds and wife be made defendants to this bill, and time answer make to the same. That the court will decree and order a division of the land and Slaves aforesaid in the manner aforesaid, and appoint fit persons as commissioners and direct the surveyor of the county to accompany them to cary the decree into 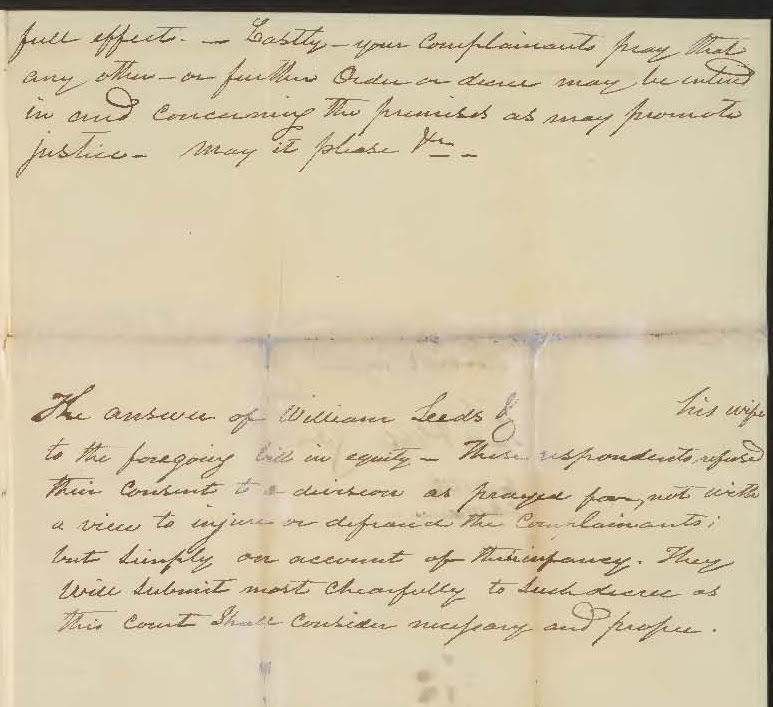 full effects - - Lastly - - your complainants pray that any other of further Order or decree may be entered in and concerning the premises as may promote justice - - may it please ??


The answer of William Seeds & his wife to the foregoing bill in equity - - These respondents refused their consent to a division as prayed for, not with a view to injure or defraud the complainants; but simply on account of their infancy. They will submit most chearfully to such decree as this court shall consider necessary and proper.

There are other Chancery cases involving William Seeds.  If they mention slave names, I will post them as they are transcribed.

Good luck in your research.

.
Posted by Carol at 6:19 PM No comments: Links to this post


Copyright 2017, CABS for Reflections From the Fence

She walks with a limp.

She sits and rocks, forward and back. 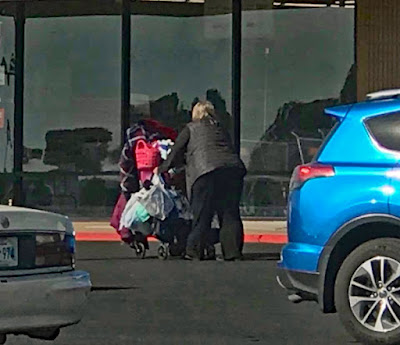 Please hold her in your positive energy.

*On our way to southwest for the winter, she walks and rocks in Tulsa, Oklahoma.

.
Posted by Carol at 9:37 AM No comments: Links to this post