Those Ancestors - - They Just Keep Surprising Us.

Seriously, you just never know what little tidbit of your ancestor's life may show up.  Or when.

Recently during a visit to Michigan, Mom brought along photos and such.  And, this!!! 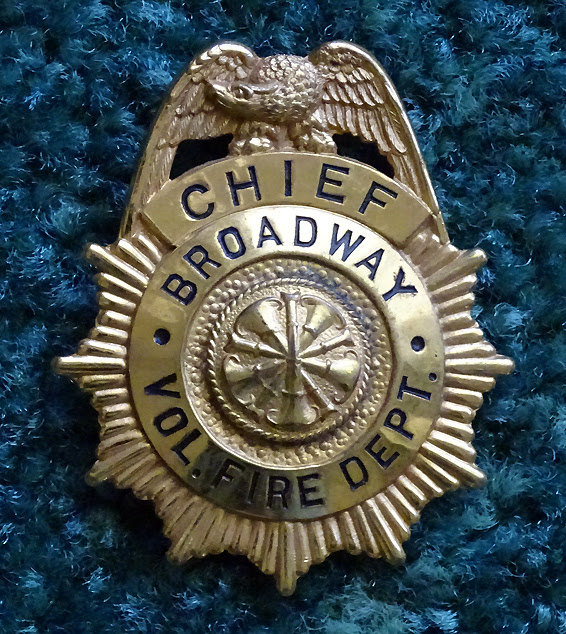 Indeed, they just keep surprising us.

.
Posted by Carol at 3:41 PM No comments: Links to this post

Oh, Edna. If This IS You, Just Too Sad for Words

The other night the 1921 Canadian Census became available online, thanks to the Library and Archives of Canada.

I hit up the search engine late in the evening, cause, well, I had to.  Sleep?  Nah.  Search. Ya!

I went first to Nova Scotia to see what I might find on Man's Fenton clan there.  I found the enumeration of William and Ida (Jarvis) Fenton and noted there were 2 adopted sons in the household.  Both with the surname of Sisco.  I dug around, messaged with a Fenton researcher I share with and we identified both.

My fast and furious searches and clicks and shocked findings are a blur now, so, to tell you the chronological search is just about impossible. Plus the fact that as the night grew cold and old and the new day dawned (meaning I searched until about 2 AM in the morning), and I grew tired, ok, MORE tired, well, the gut kept screaming, this is IT, THIS IS IT!.  But, I was so taken back by the revelations, that I knew I had to try to sleep on it, and redo the research and make better notes, and really give this all some time to seep into my core.

The short of it is, that I went to the Nova Scotia Vital Statistics site and I searched Sisco, and I started looking at just about every Sisco birth, marriage and death available.

Before I go on, I would urge you to read my story about Man's grandmother, Edna May Fenton Stevens.  Pay particular close attention to her MIA years, 1901 to 1918.  Also, note, that we have installed a headstone for Edna and Arthur since I wrote this post in 2010.  I'll be here after you read her story - -

So, you read it?  From the piece, you saw this right?

In all these years, despite many hours of researching, and even a quick trip to Nova Scotia last year, I never found another hint of any kind at what happened to Edna.  Not. One.  Hint!

But, while hunting Sisco, I found this birth record.  Please note, this is only part of the record.  From the top, name of the child, sex, birthday and place, name of father, maiden name of mother, residence of father, occupation of father, place of birth of father and race of father. 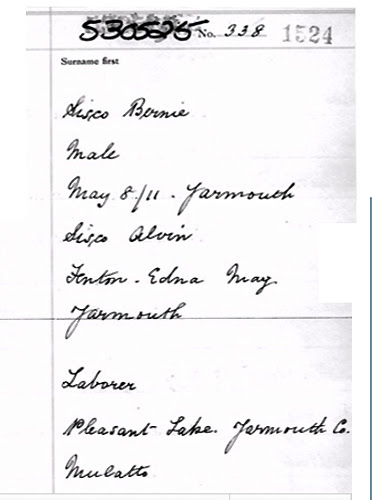 Note the name of the mother.  Edna May Fenton. As far as I know, and believe me, in this game, we never assume we know it all, there is only one Edna May Fenton that lives or lived in this area of Nova Scotia.  Man's grandmother.

You know I went looking for a marriage.  And, there is one, sorta. There is no date or place of the marriage.  Her age is not given.  Her name is noted as May Fenton.  There are no parents names. The record does not state where the parties of the marriage were born.  No name of the person that married them.  In other words, we have his name:  Alvin Sisco; her name:  May Fenton; his age is given as 21, he is a bachelor, she is single, and he is a labourer and they both live in Yarmouth.  You can find it on that Nova Scotia site, search for Sisco, marriages, 1908.

OKKK, from here on out, I am going to just list events in time line fashion.  Since I am sure in my own heart, but, feel still a bit shaky at the paper trail, please take this with a grain of salt.  I may have the wrong Edna May Fenton.  (It happens.) My findings so far, all events in or around Yarmouth, Nova Scotia, Canada.

1908 Alvin Sisco and May Fenton at least file some paper work indicating a marriage between the two.

Now, extra notes I have gathered and am still working on:

Muriel Sisco marries one Roland Archibold Jacklyn.  The marriage record names her father as Alvin and her mother as Edna Fenton.

Is this even close to being correct?

Just too sad for words.