Copyright 2016, CABS for Reflections From the Fence

I have been spending some time lately cleaning old email. As I confessed on Facebook, it is becoming more and more obvious that I am a Email hoarder. I have email going all the way back to 2004 in one account, and 2005 in another. I know, I know.

Whatever, I am attempting once again to deal with some of this mess. I figure if I deal with 100 emails I am 100 ahead, ya know??

I woke about 4:30/5:00 AM. What woke me was this very very very loud shhhhhshhhhhhing noise.

After I stumbled around in here trying to find the source of this loud shhhhhshhhhing, I went outside to find a LAKE!! In our campsite and a stream of water rushing down the road behind us." 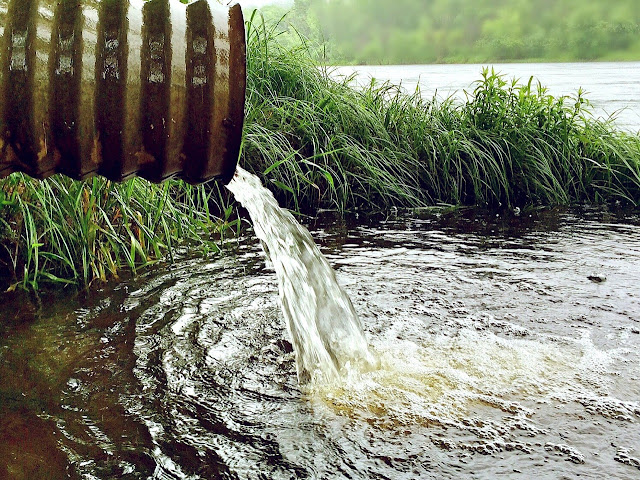 The water supply had sprung a leak. OUR water supply. Thinking it was our hose, I mucked over and shut off the faucet thingy. No change. Turned it the other way, thinking I turned the wrong way, (I was still not awake), and back the other way, several times.

So, I go back in and wake Man and he tells me to turn off the faucet, well DUHHH, I am not that sleepy. So, he takes the flashlight and out he goes.

HMMMM, Man comes back in several minutes later and tells me, yaaa, the supply line is busted.

So, I call the office figuring I will get a answering machine and no more sleep, cause the SHHHHSHHHHING is so loud there is no way I am going back to sleep.

So, I tell her we are leaking, and it is running down the road. She sounds VERY awake when she asks, what site???

Bout 10 to 15 minutes later some guy shows up with a bunch of wrenches, takes off the trap to the supply area, gets soaking wet, but shuts off the water.

So, now, we have no water, cept what is on board. They promised to come back when the sun comes up (sun is up, he can come anytime) and fix it.

He said it was extremely high water pressure and it blew off some fitting.

(I did note in the email that the water was repaired and turned back on, so, all turned out just fine, thank you.)

Now, dear readers, please note that now I have one less email in the hoard and one more blog post. Also, note that I have discovered that this was written from somewhere around Burleson Texas and I have ABSOLUTELY no recollection of the event. So, I guess it can be a good thing, saving all those emails, right?

OH, Richard. I just know this is you even tho proof eludes - -

Copyright 2016, CABS for Reflections From the Fence

While cleaning email accounts the other night, I ended up over in a newspaper site for which I have a subscription. Of course, I typed in the surname "Lashbrook".

And, I found this very sad article, from the Des Moines Register, Des Moines, Iowa, publication date: 1 December 1903, article heading:  "Iowa 42 Years Ago".  A bit of rough quick math tells me this tragic event would have originally happened about 1861.

Because of the "researchers knowledge" I have on this clan, it did not take me long to consider that the Mr. Lashbrook in this article, even though his given name is not stated, (nor the name of the boy), is this Richard Lashbrook Jr., son of Richard Lashbrook and his wife, Ann. Here is his baptismal record.

Here is just about everything I know about Richard Lashbrook, Jr. from my data base:

Not a lot there, here is what I have in my text notes:

"Richard applied for naturalization while he lived in Clinton County, New York.  He was granted citizenship on October 4, 1842.  He signed the paper work as Richard Lashbrook Jr, with an "X" mark, which tells us he could not write.

On the 20th of December 1848, Richard Lashbrook, Junior, was the grantee of a warrantee deed from Alexander and Harriette Brand for land located in McHenry County Illinois.  He paid $80.00 for the property which contained 80 acres, the land was described as the E 1/2 of the NE 1/4 of Section 13, Township 45.

Richard is listed on the 1851 Town of Marengo Election list.  Said election was held November 4, 1851.  It appears they voted for a Treasurer, Surveyor, School Commissioner and "for and against the general banking law".  Thanks to the McHenry County Illinois Genealogical Society for publishing this list in their April 2002 issue.

Richard was not named in his father's will.  In the settlement of his mother's estate he is listed as deceased and that there were 10 living children, although the administrator could only locate 8. The children were not named.   However, when Richard's brother John died in McHenry County and his estate went through the probate process, all 10 of Richard's children were named.  One of Richard's daughter's, Emma signed an affidavit stating her father had died "about the year 1862" and named the children."

Yes, I know, the article is Iowa and it appears that Richard was in McHenry County Illinois for years.  From my years of research, I am also aware that several of the Lashbrook clan moved together, around 1855-1860 to Bremer County Iowa.  His widow, Betsey is enumerated in 1870 in Bremer County Iowa.

I know it's you Richard, I just know it is.

* I have written about Richard before, you will note, I had a wish list,

"Discover place and date of death and burial."

This is the first crack in that wall in over 2 years.