It's Summertime, Which Means, It's Gardening Time.

Copyright 2022, CABS for Reflections From the Fence
Research and such has taken a back seat, temporarily, to the gardens.
Here is my pink flowering crab apple - - 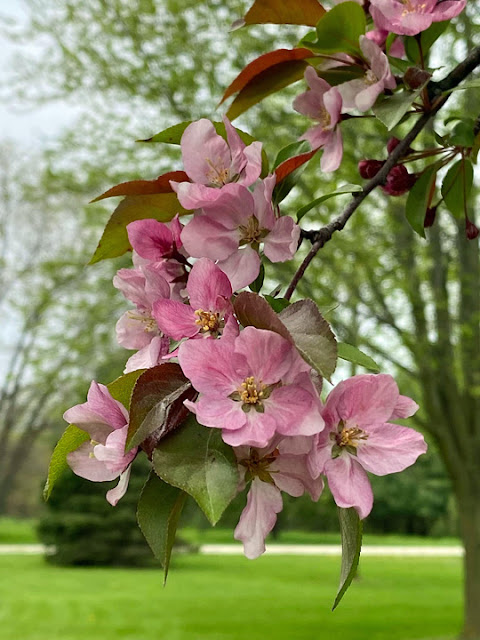 I love this deep yellow iris. 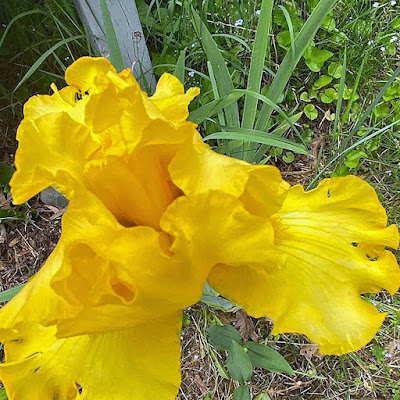 I have three of these pink petunias hanging on the front porch, one had a nest problem.  LOL. We ended up with one cowbird egg and 4 finch eggs.  By the end of the process we had one cowbird fledge and 2 finches fledge. 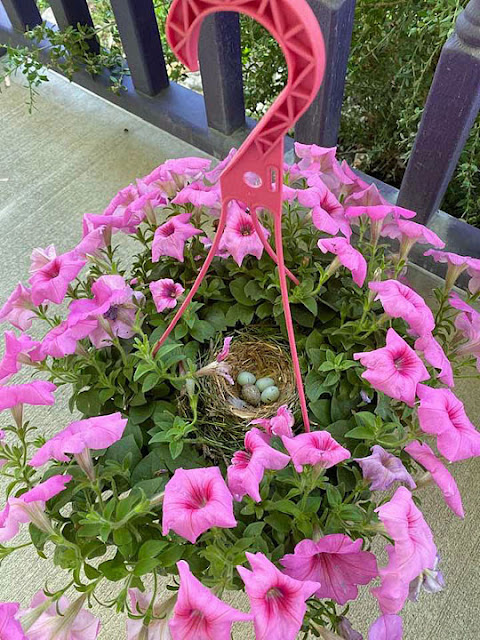 More petunias, I have a variety of colors.  And, they cut well so I can bring some in to the house enjoy the color inside too.  These next two are hanging baskets. 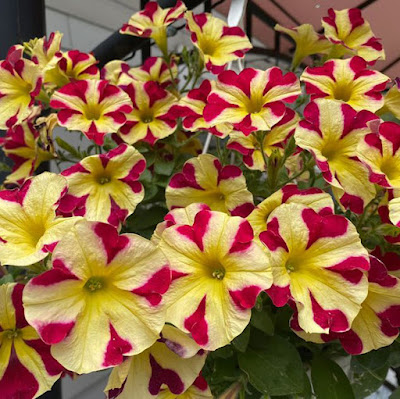 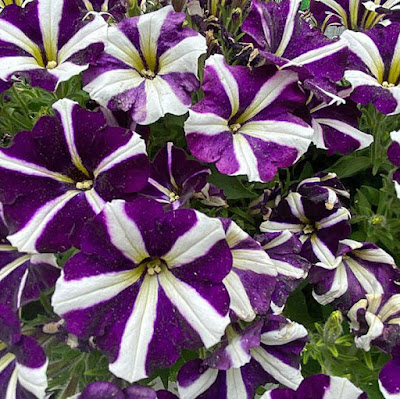 Petunias in pots, the pink ones, one pot went flowerless, for several weeks, then, bam, it bloomed profusely. 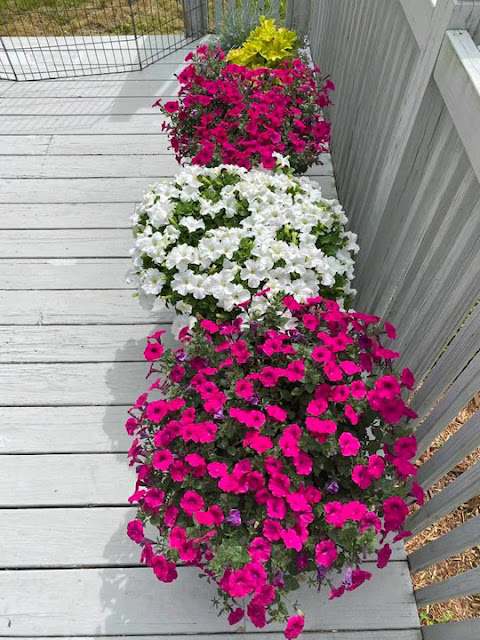 These verbena have out performed any I have ever had. Tucked in with them are some deep purple petunias. Yes, I have a lot of petunias this year. 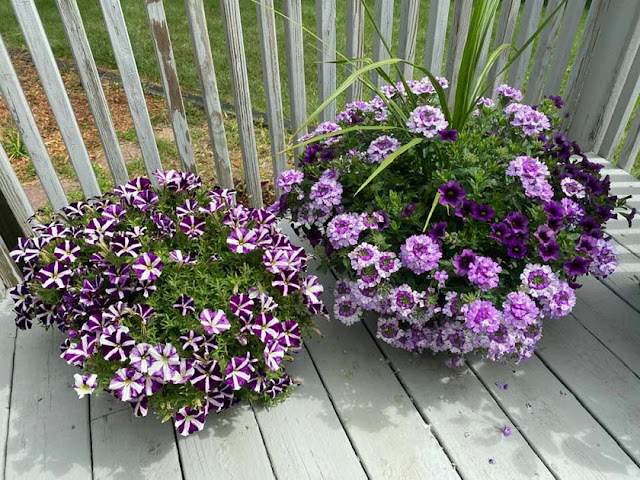 We have had quite a few fawn sightings this year. We might find one per year, but, this year, we have had at least 4 sightings.  The mom's drop them off for the day in our yard, and return hours later to reclaim them. 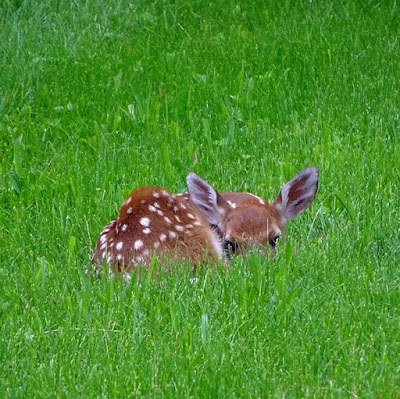 This photo, poor quality, and that's an overstatement, still brings smiles.  I caught one of the fawns being "picked up" by mom after a day in our yard.  It was running to mom with joy and jumps.  Every time I see this photo I giggle. 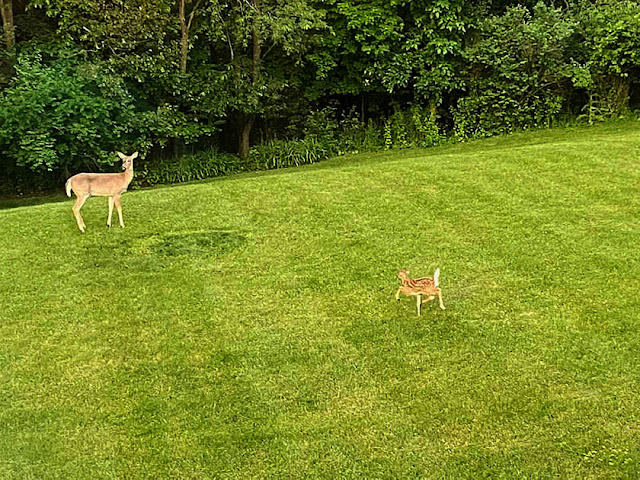 I have never had a hibiscus, till this year.  It was thick with foliage, and was blooming.  Then, it got testy with me.  Leaves started turning yellow and falling off, 10 or more a day.  Flowers, slowed.  I moved it to a less sunny spot, kept feeding and today, I had 4 blooms.  And, 10 more leaves on the ground!  LOL. 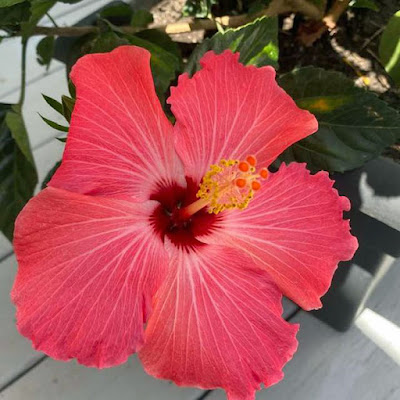 Will return with some more genie posts soon.  In the meantime - - happy gardening.

Email ThisBlogThis!Share to TwitterShare to FacebookShare to Pinterest
Labels: gardening and nature

Marietta "Etta" (nee) Butts Patton Bennett, and Marietta (nee) Pickler Bennett, Must We have Two Marietta Bennetts? Research Report, the As It Is Series

Copyright 2022, CABS for Reflections From the Fence
This continues a series of posts, done in a very efficient (make that speedy fast) manner to share some research on the ancestors.  This is NOT intended to be the end all to end all report.  It's a work in progress, to show you what I have found, right or wrong. Kind feedback is welcomed via comments.  *Note:  This one sure did not end up being fast, took me hours to try to figure this out.  It is all correct? Well, I think so, but, I am not betting my morning coffee on it.
Let's begin - -
Meet - - Marietta "Etta" (nee) Butts Patton Bennett, shown here with her parents, her first husband, Sylvester, and their children. 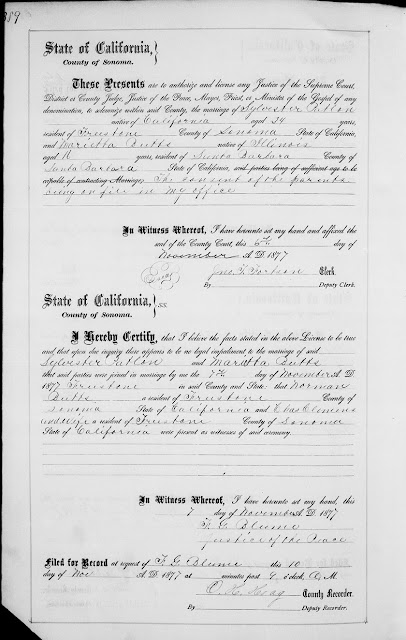 Here is the Cliff Notes version of what I found on her.
Parents:  George Pickler and Emily Martin, married 5 Oct 1840 Indiana.
Someone posted a very long and detailed bio on George on their family tree at Ancestry dot com, it is a great guide to further research.  Interesting this - - they state:
"Edwin C. Pickler became a prominent doctor in Minneapolis, Minnesota.  Marietta Pickler also became a doctor."  There was a foot note to source, stated to be:  "Adair County history, p. 55".
*Note:  I did not successfully find the source, nor did I ever find any indication that Marietta was a doctor.  Edwin was a son of George & Emily and a sibling of the Marietta Pickler.
After George's death (reported to be Aug 1870 at Kirksville, Adair, Missouri), Emily married a Russell Crow in 1879.
For many researchers Marietta is lost in the records after the 1870 and 1880 census enumerations.
I did not find her on the 1900 or 1920 census reports. She is, however, found in the following census enumerations:
Marietta Bennett
in the 1920 United States Federal Census
Name: Marietta Bennett
Age: 65
Birth Year: abt 1855
Birthplace: Iowa
Home in 1920: Los Angeles Assembly District 63, Los Angeles, California
Living with her are her daughter, Beulah and granddaughter, Virginia.
Marietta P Burnett
in the 1930 United States Federal Census
Name: Marietta P Burnett
[Marietta P Bennett]
Birth Year: abt 1863
Gender: Female
Race: White
Age in 1930: 67. ** Gotta love how she only aged 2 years since the last census, eh?
Birthplace: Iowa
Marital Status: Divorced
Relation to Head of House: Mother-In-Law
Home in 1930: Los Angeles, Los Angeles, California, USA
Living with daughter, Beulah.
Marietta Pickler Bennett
in the 1940 United States Federal Census
Name: Marietta Pickler Bennett
Age: 77
Estimated Birth Year: abt 1863
Gender: Female
Race: White
Birthplace: Iowa
Marital Status: Widowed
Home in 1940: Berkeley, Alameda, California
**In same hotel, the Donogh Arms Hotel Central Hotel, enumerated immediately with her are her daughter Beulah and Beulah's daughter, Virginia.  Some follow up research on my part shows these relationships to be fine.  Also note, that all three ladies are interred at Hollywood Forever, Hollywood, Los Angeles County, California, and all three have Find A Grave memorials.
After hours and hours of clicking and searching, I finally find Marietta Pickler and her marriage to Mr. Bennett, Charles C Bennett:
Mettie Pickler
in the Missouri, U.S., Marriage Records, 1805-2002
Name: Mettie Pickler
Marriage Date: 5 Sep 1881
Marriage Place: Adair, Missouri, USA
Spouse: Charles C Bennett
At this point, I believe that is the extent of the information I have found on both Mariettas.

My conclusions - -
Marietta "Etta" Butts Patton Bennett, I have marriage for Marietta Butts to Sylvester Patton.  I have marriage index for Etta Patton to Frank Bennett.
Marietta Pickler Bennett, I have marriage for Mettie Pickler to Charles C. Bennett.
I have done sideways research for both gals and conclude there just happens to be two gals by the name of Marietta that end up married to dudes by the name of Bennett, both gals were born at nearly the same time in Iowa and by the luck of the draw, both end up living in California for many years.
The Find A Grave memorial for Marietta “Etta” Pickler Bennett, is not the gal I was researching, the Butts descendant, even though that memorial is a mix of facts for both gals.
Marietta "Etta" Butts Patton Bennett demise is still undiscovered.

**If you stuck with me this entire post, pat yourself on the back, well done, you emit much stamina.

* Disclaimers, I use Find A Grave, Ancestry dot com, FamilySearch, several newspaper subscriptions, free sites, such as Virginia Chronicles, Virginia Chancery Cases online at the Library of Virginia and more to research my ancestors.  I pay for subscriptions, full price.
** My judgements may or may not be correct.  Transcriptions may or may not have errors.
*** Links, URL's, for the most part will not be included henceforth on my posts, as so many of them change and then I have to come back and try to re-discover and relink.  Frankly folks, I have no desire to spend my limited time here on this side of the sod with those kinds of do overs.  As researchers, or just members of the internet community, sites such as Find A Grave are easy to find, some are free to use and with the information I am sharing with you, hopefully, you can duplicate the research/findings. That said, I have seen memorials at Find A Grave be removed.  If you have questions, I suggest you leave a nice comment for me. OR find the method I have outlined on my blog for contacting me.
**** I hope the usual happens, within hours, sometimes minutes, I do another search and something shows up.  Well, I can hope.
Posted by Carol at 6:30 PM No comments:


Welcome to Reflections From the Fence. I write about family and family history, Rving, yorkies, nature and whatever else comes to mind.

For flora and fauna photos, visit Reflections Flora and Fauna.
All photos on this blog are those taken by Man or Moi, unless otherwise noted. Documents are either from some great genealogy site or are scans of originals I have turned up in my years of research. Other images should be accompanied by some kind of source data.

View my complete profile
Profile photo courtesy and many thanks to Dawn Carl.