And, Oscar Helped to Built The Hotel Lassen in 1918

Former Arkansas City Man Does His Bit in The War.

Speeding Arkansas Cityward from Wichita, last night, Oscar Lashbrook was happy because he had some money in a bank in this city that would help Uncle Sam win the war against the kaiser.  He went to the bank this morning and invested a neat sum, several hundred dollars in Baby Bonds.

Oscar is working on the new Lassen hotel, a ten story building going up on  Market street in Wichita.  He said Witchita was not stopping public improvements on account of the war and that considerable building would be done there this spring.   He said Arkansas City seemed more active to him than it ever had before and he believes this city is going to give Wichita a big race for the metropolis of Kansas."

As frequently happens while I am consolidating, linking and cleaning, I see some article, like this one, and the next thing I know I am off somewhere in the deep tunnels of research and find some little jewel.  Like a photo of the building taken in 2012: 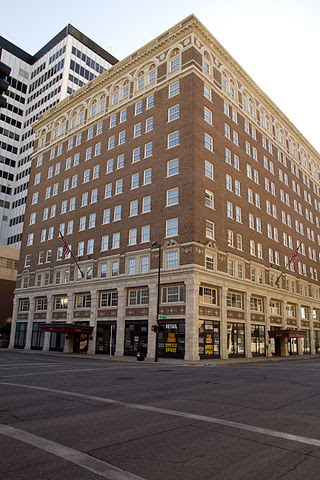 Photo was found on a Wikipedia page, and tells us:

"The Lassen Hotel in Wichita, Kansas, also known as Market Centre, was built in 1918. It was designed by architects Richards, McCarty & Bulford. It was listed on the National Register of Historic Places in 1984."

.
Posted by Carol at 9:49 PM No comments: Links to this post