This is week 12 of my participation Amy Johnson Crow's, once a week challenge to blog about one ancestor a week, tell their story, biography, a photograph, an outline of a research problem — anything that focuses on that one ancestor. More about the challenge can be found at her Blog, No Story Too Small.

Leighton lived such a short life, only 13 years, 9 months and 4 days according to his death certificate.  He is found enumerated on the 1910 U. S. Census of Washington District, Norfolk County, Virginia with his parents, a extraction of the census enumeration follows: 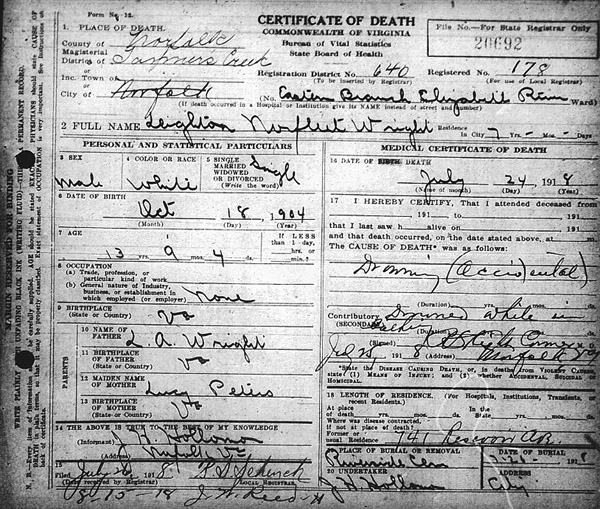 Leighton's death certificate shows that he died by drowning in the Eastern Branch of the Elizabeth River while "bathing".  I note that his mother's maiden name is recorded in error on the death certificate and we do not find Leighton buried at the Riverside cemetery.  It is possible he was buried there, however, we find a headstone for Leighton in a plot owned by his mother at Cedar Hill Cemetery, Suffolk, Suffolk City, Virginia. Plot: Section X as recorded by Find A Grave, or BLOCK V, LOT 26 as recorded by Ms. Bruce Saunders, compiler, Cedar Hill Cemetery Records, Nansemond County, Virginia (found at Nansemond County GenWeb).

I began to wonder as I wrote this post, how warm was at the end July of 1918 when Leighton died?  He was swimming, or "bathing" as it were.  I snooped around a bit and found that http://www.wunderground.com/ only had records posted back to 1948 for this area of Virginia.  I did find this factoid tho:

"The hottest temperature ever officially recorded in the Norfolk-Virginia Beach area is 105 degrees, which has occurred on three different dates. The first time it was 105 degrees was on August 7, 1918."  Source.

Leighton died just 2 weeks before this record heat day, had the heat wave already begun?  Maybe future research will reveal that for me.

I also wondered where the Eastern Branch of the Elizabeth River might run. This Wikipedia page tells us, "The river flows from east to west, starting in Virginia Beach."

I then took the address of 741 Reservoir Avenue from the death certificate, that being the address of the residence of the deceased and thought I would give Google Maps a swing at that.  Well, I have a hit, the address is represented by the Red "A".    And, look how close the Eastern Branch of the Elizabeth River is.  By using the scale on the map and a rough measurement, it appears that 741 Reservoir is a little less than 1/2 mile from the river.

I have no idea of knowing for sure without some more research, but, I think this makes some sense now.  The Wright family did not live that far from the river and a cooling off place with summer temps and high humidity. We can pretty quickly come to the hypothesis that Leighton went to the river in the heat of the day and somehow, sadly, he drowned.  Sounds good, for now, until I can hopefully can discover more. 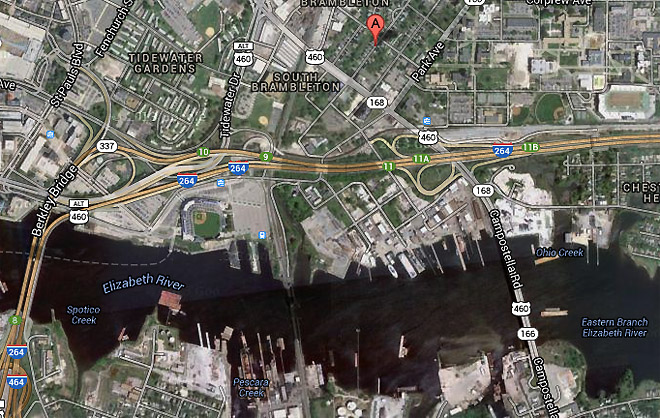 Leighton has a headstone at Cedar Hill Cemetery, Suffolk, Suffolk City, Virginia.  (Photo courtesy of and used by permission of Steve Poole.)

"Leighton Norfleet Son of Leighton A. and Lucy Pierce Wright, 1904 - 1918, Suffer Little Children to Come Unto Me and Forbid Them Not, For of Such is the Kingdom of Heaven." 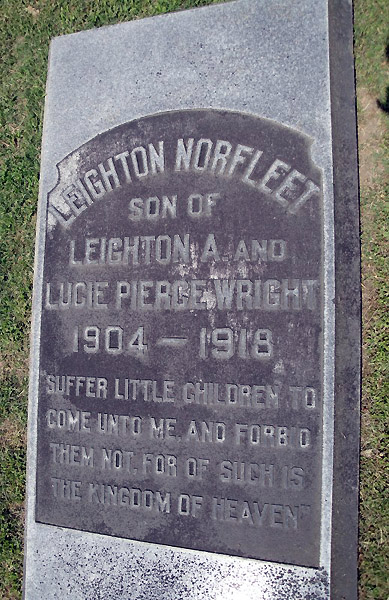 From the records at the Cedar Hill cemetery site at Rootsweb.com we learn that Leighton's parents are both buried in the same plot.  By visiting his Find A Grave memorial, you can find links to his parent's memorials as well.

Wish list for Leighton:  a photo of this young man, taken too soon.  Newspaper accounts of his death or obituary.  Possible verification that he is in truth buried at Cedar Hill.

My interest in the Wright clan stems from the heritage of Lucy N. Pierce Wright, Leighton's mother.  Lucy is my first cousin, three times removed via our common Darden ancestor, Charles Henry Darden.

*** I use many resources to research, FamilySearch.org is a free site.  Ancestry.com is a pay site for which I pay, no discounts, etc.  None of these sites have asked me to review them, or use them.  See my Disclaimers page for further details.

**** Map courtesy of GoogleMaps.  The usual disclaimers apply.  I use the service, they have not asked me to review their service.