THE Trip, THE Encore' :: Buckeye Arizona to Bullhead City Arizona, Up Up and Away

We actually cut our stay in Buckeye a few days short so we could work out a future 3 night stay in Death Valley.  First stop though is Bullhead City Arizona, cross the river from Laughlin Nevada.

We took a route that went on "back" roads, first Wickenburg, then, on west to Kingman and final destination, Bullhead City.

We passed through a lovely area chock full of Joshua Trees, but, could not find a safe place to pull over,  I was desperate, there were some blooms.  I just could not get a shot of them at 60 MPH.  I did however get a over all shot showing quite a few Joshua Trees and a lovely mesa behind.  (Watch out now folks, I just purchased a tiny little book naming landforms in Arizona!  Best $2.00 I ever spent!)

That said, I am not sure about this land form (dead center in the photo), so, guessing it is some kind of "butte". 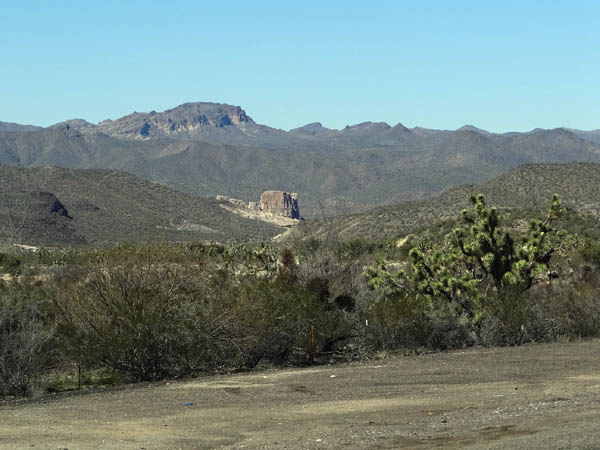 Below, the road winds between the hills, up and up away.  We eventually climb to oh, approximately 4,000 feet, give or take.  Ya, that is the disclaimer way of saying, I know we were close to that, but, I was too busy looking at the scenery to capture the high point numbers on the GPS. 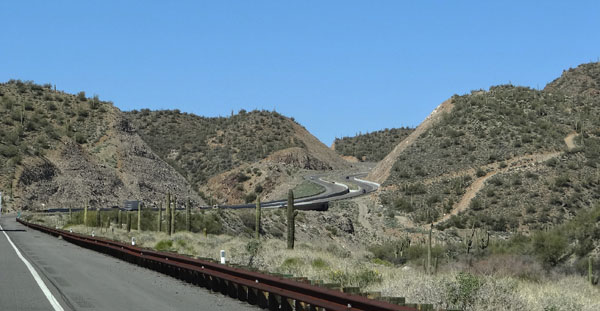 All of a sudden these round boulders and rocks appear.  They go on for a couple of miles, then, disappear.  My new little book says they are granite boulders formed from spheroidal weathering.  OKKK now.  Neat fact, they are formed just where they now lie, they did not roll down some hill. 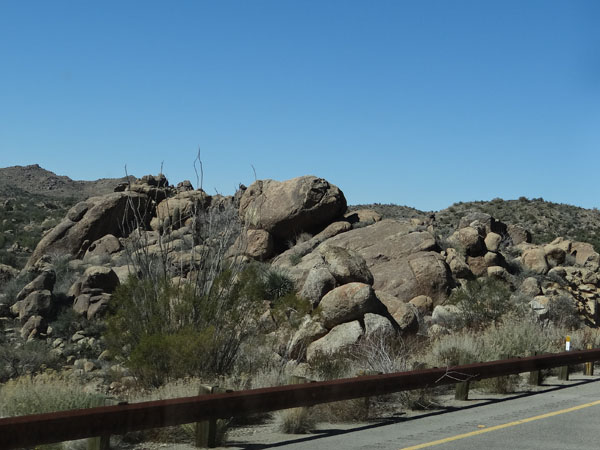 Now, this photo was cropped, shopped, sharpened and sharpened some more. I hope you can see that sign that says, "NOTHING".  And, there was nothing much here, cept that hanging sign.  OK, I have a weird sense of humor, we all know that.  This cracked me up! 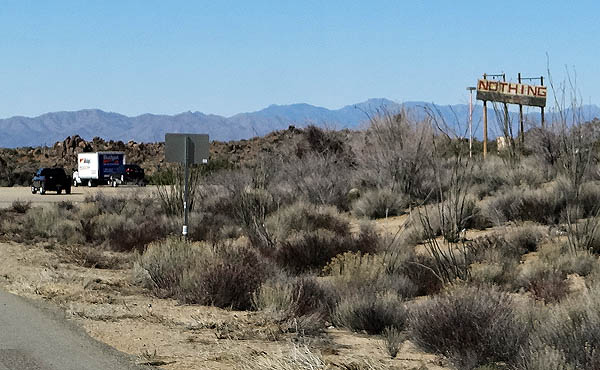 Man has been looking for some mountains and hills to drive with his truck Jolly.  We found a bit here.  Yes, it says 6 % grade for the next 12 miles!  AWESOME!!  He says he never touched the brakes, he had the exhaust brake on.  I thought he did brake one time when I indicated I was out of my comfort zone.  Anyway, I do believe I heard a bit of "yeeee hawww" coming from the driver's side of Jolly. 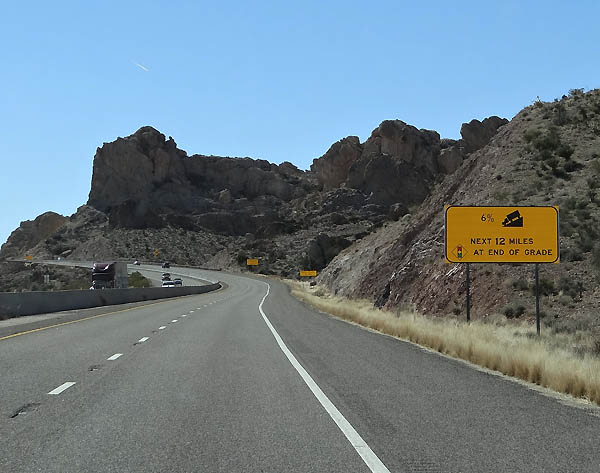 Personally I was busy with Sony Too, is this beautiful or what??  Mother Nature and her elements, showing off a bit! 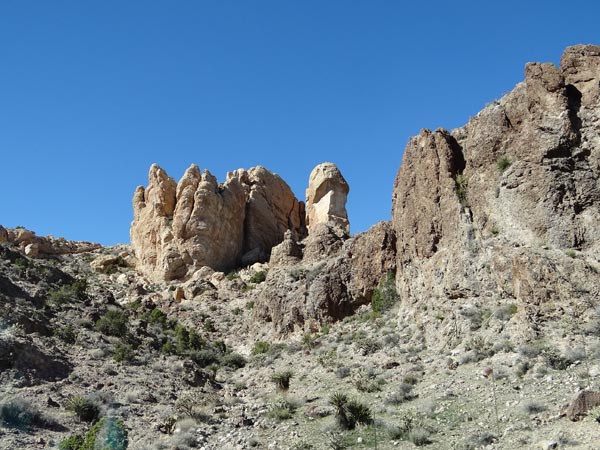 Caught these fellows doing a bit of some kind of construction on that steep grade.  Guess if you go slow enough you get up there, eh?? 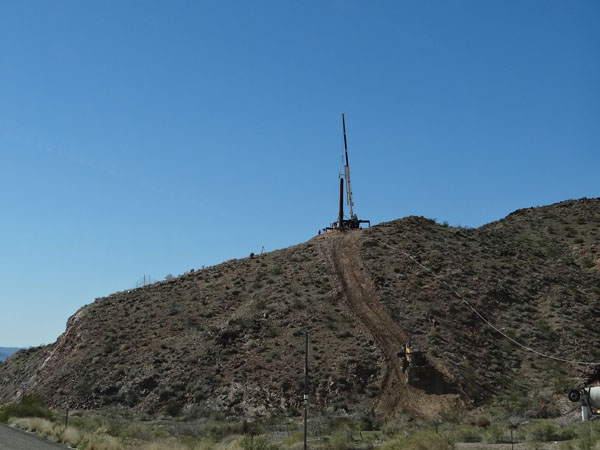 Thankfully, we did not need this runaway ramp. 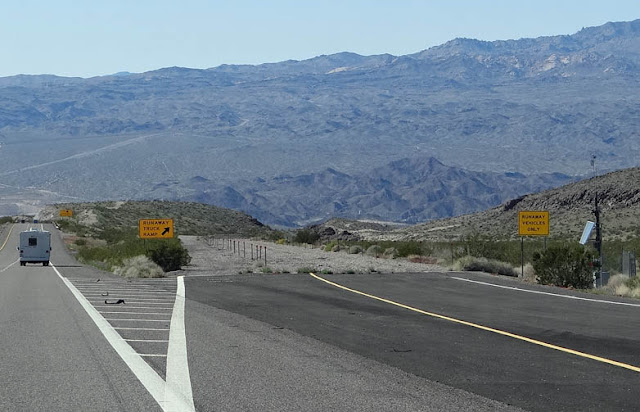 Home for the next week: 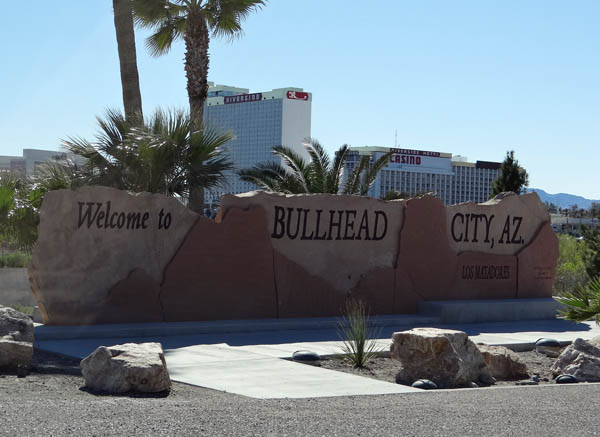 We had reservations at a well rated campground, did not work out as we could not put up with the site they gave us.  So far, it is still not very humorous.

We ended up at the county park near the Davis Dam.  It has served us well.  So, stay tuned for Oatman, Route 66, some Laughlin and petroglyphs!  The view from this Davis Dam campsite at night is pretty good, eh?? 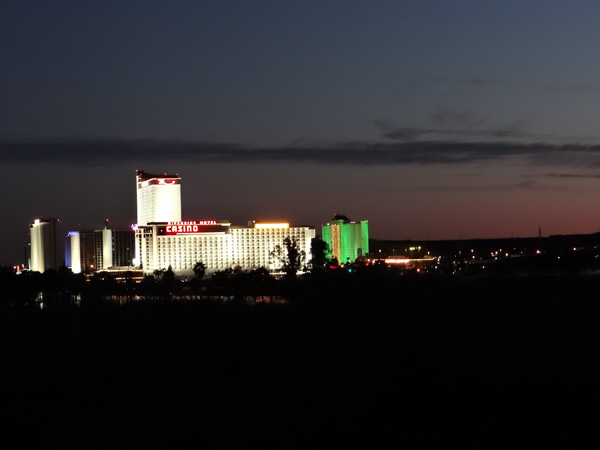