Found Those Hiding Turners, Yes, I Did, FINALLY!

Yes, I still research (you know, genealogy, family research) now and then.  It is harder to find a hunk of time while we are traveling and enjoying the USA and shooting hundreds (well, thousands) of photos and blogging about it all, however, now and then, I just need to get some balance in my life and do a few hours of research.  Gotta have 15 to 20 web pages open, the photo digitizing program, the data base, and several other programs all going at the same time.  Flipping back and forth, recharging the batteries (mine) and hopefully kick starting the brain into function.

And, then there are these souls residing in my data base that I just cannot seem to stop researching.  Their stories have open ends, even tho I know they have passed to the great beyond.  Every time I pass their names in my data base, I search a little, wonder, why are you hiding, where are you??  Some just need to be found and will not leave me alone until I do.

Such is the story of Una Margaret (Grettenberg) and her hubs, Fred A. Turner.  I wrote about her parents way back in 2009.

I had Una's delayed birth record.  (Side note, I have never really figured out who Carrie the cousin who signs this document is, maybe I'll work on this again soon.) 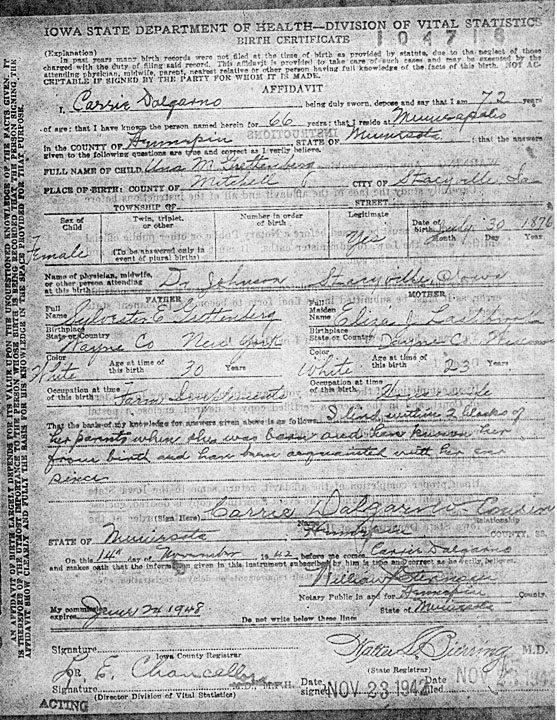 Over the last few days, I have been reviewing the Lashbrook clan, adding some new names, finding a few here and there on Find A Grave and I even found the image (thank you FamilySearch) of Una and Fred's marriage.  I had the information from an index, but, there is nothing like the image, eh??  (This is the best I could do with this image, the online copy was so faint I could barely read it, but, I COULD read it!) 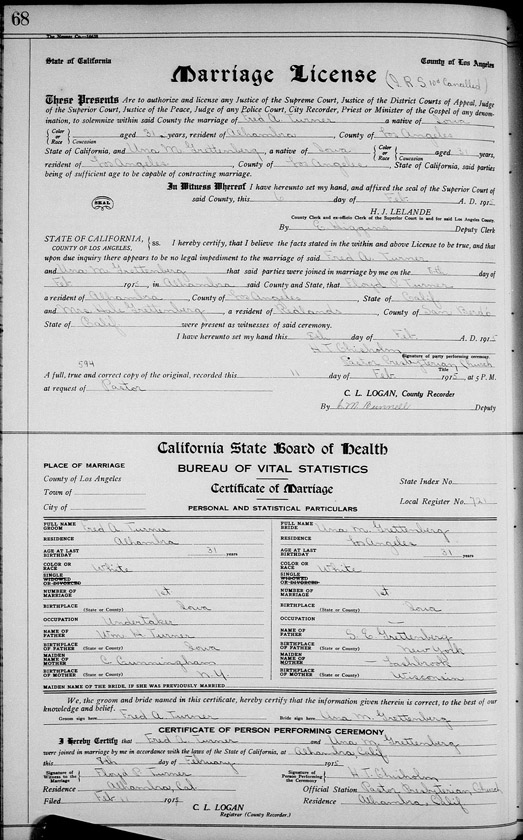 So, last night, I started again, over several hours I tried to chase down a suspected date for Una's death, I had this date, but could not verify it.  After a bit of deep digging, I found that some California deaths are at FamilySearch.  I finally found the correct data base (don't ask how long that took, what was I saying about trying to keep my brain functioning??  SIGH).  I actually found the certificate number, something that is missing from the online indexes.  Score!

I checked out the California Voting Registers at Ancestry.com.  Collected some interesting data there.

Actually did a map search (Google) and looked at the house of the last address I could find using street view.  IF the map showed me the correct house, well, today, a very pretty, well kept home sits at that address.

Eventually I wandered around the online services and located this death notice for Una.  Score!

Note, no information on burial or interment.  Well, we all know, one step forward, one sideways.

I also suspected a death date for Fred, and using the same data base and a little more sideways searching, I located a death notice for him.  Score!

Ah, ha, a bit of information on the interment.  Yep!  I was able to find a web site for the funeral home, attempted to write them an email. FAIL.  The email bounced in seconds.  However, there was a link to the blue social media page, and yes, I went there and yes, I sent them a message.  No response yet.  Fingers crossed.

I then did a generalized web search and hit a bonanza.  Transcribed by V. Gerald Laquinta. Found at the web site for Los Angeles County Biographies.  Thank you.  Well done!  Due to possible copyright issues, I will put a bit of the full biography here, and you can read the rest, here.

"For many years one of Alhambra’s leading businessmen and a civic leader of top rank, Fred A. Turner has seen the city grow and prosper since he first began to serve Alhambrans as a funeral director in 1913.  Associated with Pierce Brothers, the largest firm of funeral directors in the West..."

And, the last paragraph of that wonderful transcription, yes, you heard a few WOOTS from Carol!

"Mrs. Turner, the former Miss Una G. Grettenberg, is also a native of Iowa, from Mitchell County.  She has been active on the Alhambra Library Board for close to twenty-five years."

There are some loose ends on this research, such as considering ordering Una's death certificate, as the index has her mother's maiden name all wrong, I sure would like to see that.  And, there is this article I found this morning in the Los Angeles Times archives from 1961 when Fred was awarded Man of Year Award Alhambra in 1961.  Might have to spring the $$ for that too.

* Need or want further source data, contact me, there is an email addy over there in that right hand column.

** Oh, and those disclaimer things the law says I need to include.  I pay for the sites I use that need to be paid, I do not get kickbacks, blah blah blah, see my Disclaimer tab at the top of this blog for full disclaimer.
.
Posted by Carol at 1:26 PM

Carol, It's nice seeing you blogging about genealogy. I'm a little confused as to why you want Una's death certificate, if you already have it. What am I missing?

Your genealogy articles are just as entertaining as your traveling ones !

Barbara, I don't have the certificate, I only have the information off the California Death Index. I do have her delayed birth cert and her marriage record. I need to find out what the current charge for a death cert in California is.

Magda, You have me smiling and blushing, thank you!

What a great find!

I don't think that brain of yours is ever NOT kick started into action!

Keep on keeping on!