This is week 5 of my participation Amy Johnson Crow's, once a week challenge to blog about one ancestor a week, tell their story, biography, a photograph, an outline of a research problem — anything that focuses on that one ancestor. More about the challenge can be found at her Blog, No Story Too Small.

Last we we chatted about Maria Eva Molder/Molter.  Maria was the mother of Valentin Rudig AKA Valentine Ruthig.

Johannes (John) Ruthig, son of Johannes Philip Rudig and Maria Margaretha Hirsch, was born on January 24, 1796 in Schoenenberg, Bayern, Germany.  Below is the Church at Miseau Germany, from our quick visit in 1997.  The church was not open.  Due to circumstances, we were happy to drive up, see it, walk around, take some photos.  It is a beautiful building. 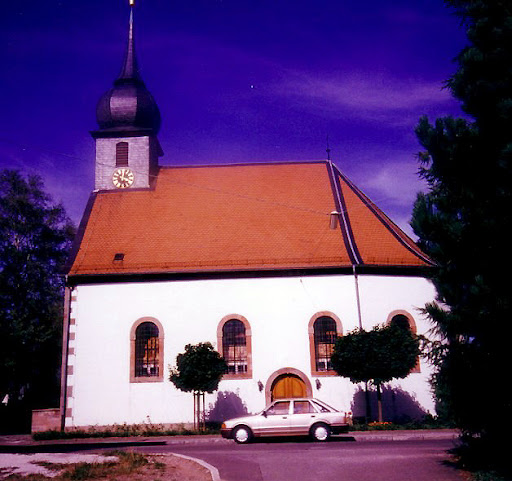 This is Johannes baptismal record. The record was found in this record set:  "Baptism, death, marriage and confirmation records of the Protestant Reformed Church (Evangelisch-Reformierte Kirche in German) of Miseau and Obermiseau, Bayern, Germany.  LDS films 1457640, 0247639, and 0193094."

His record is the last full record on this image. 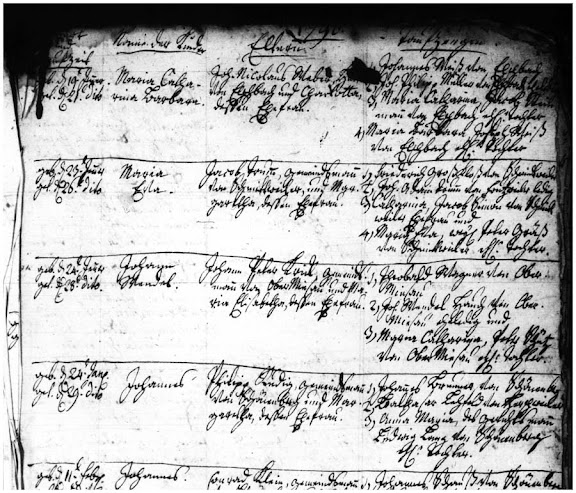 Johannes was confirmed on the 20th day of April 1810 according to the church records of the Protestant Reformed Church of Obermiseau, Bayern, Germany.  I currently do not have a copy of this record in my digital files.

Maria and John had three children: Katharina, Valentine, and Johannes.  All three of the children were born in Germany.

The following family tradition stories have been generously shared by other descendants of Johannes.  They are shared here with that in mind, family traditions and stories are so quickly lost to time, we are thankful for any that are found, they are all so special.

"John lived in Shoenenberg, in the district now known as Rhineland Phalz, where he carried the mail, going on foot from village to village before there were any railways.

John immigrated to America in 1836 and there with his family of one daughter and two sons settled in Waterloo, Waterloo County, Ontario. Here he worked at the flour mill. He had to haul flour to Buffalo New York with oxen. In 1842 he moved with his wife and family to a farm in Wilmot Township, near New Hamburg Ontario. This farm like most of this part of Ontario at that time was still covered by forest." 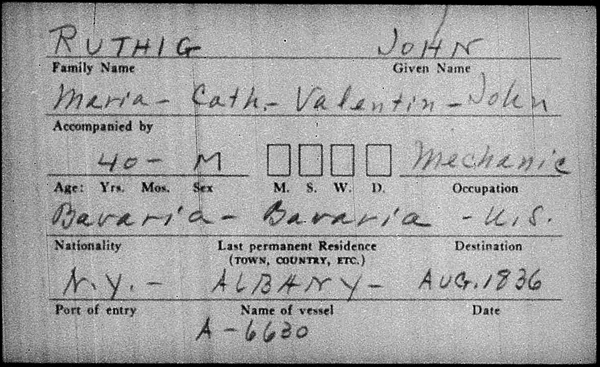 John was naturalized on February 15, 1845. His naturalization papers state that he had lived in Canada for 7 years as of  September 14, 1843. That would indicate that he moved to Canada in 1836. John was actually naturalized in 1848, the date being entered wrong as 1845 on the register. His naturalization can be found on Reel C-15693 available from the National Archives of Canada, Volume 8, Entry 499, Waterloo County. Copies of the naturalization records are not currently part of my collection.

John is enumerated on the 1861 Canadian Census in Waterloo County, Ontario, Canada: John Ruthig, farmer born German, Lutheran, age 67, married, living in a frame home, 1 story, built in 1848 (year is crossed out); Marie Eva, born Germany, Lutheran, age 66. Next family enumerated is that of his son, John, and also found on the same page of the census is daughter Katharina and her husband Frederic Kuntze.

John died on Jun 22, 1880 in Wilmot Township, Waterloo County, Ontario, Canada at age 84. Here is his death record. I have digitally removed other records from the image, I have not changed the facts. 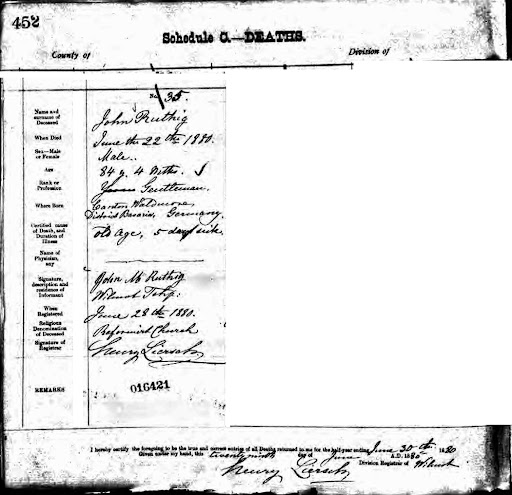 John's burial place has not been recorded yet in my data base.

My wish list for Johannes Ruthig:  Image for the confirmation record, locate, scan and link to data base.

Recheck files to determine if I have copy of the naturalization papers, if not, investigate possibility of obtaining same.

*** I use many resources to research, FamilySearch.org is a free site.  Ancestry.com is a pay site for which I pay, no discounts, etc. The Library and Archives of Canada site is a free site.  None of these sites have asked me to review them, or use them.  See my Disclaimers page for further details.