Sunday's Stories, 52 Ancestor Weeks, Week # 6, August Gruenwald, WHERE Did You End Up?

This is week 6 of my participation Amy Johnson Crow's, once a week challenge to blog about one ancestor a week, tell their story, biography, a photograph, an outline of a research problem — anything that focuses on that one ancestor. More about the challenge can be found at her Blog, No Story Too Small.

How about we start with the back story, as I know it, not that there is a lot:

In 1888 a small family from Germany stepped off the German ship, J.C. Pfluger at Honolulu Hawaii.  The ship's master was B. Kruse.  The J.C. Pfluger had sailed from Bremerhafen.  It arrived in Hawaii on November 2, 1888.

The family we are interested in appears about half way down this page, Karl H. Gehrke, 24 years of age.  Listed next we find, Charlotte Gehrke, age 27; Fritz Gehrke, age 3 and Hedwig Gehrke, age 10 months.  Please note the next passenger is one August Grunwald, age 5.  He does not appear to be part of any of the other family groups, families with the same surname.  It's just August.  Five years of  age.  Listed.  Traveling with whom? 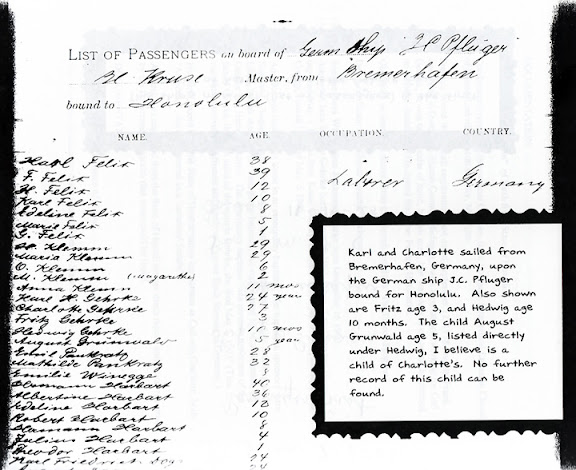 You will note in the caption on the right that I state that August may be a child of Charlotte's.

A closer look at just the names:

From family tradition: it is reported that Charlotte had a illegitimate child named August before she married Karl. Charlotte and Karl had more children, census reports state she had to up 13.  I have records of ten.  If you count this August Grunwald as a child of Charlottes, I have eleven children accounted for.

One of Karl and Charlotte's children, Frank died in 1919.

Frank's obituary appeared in the Friday, October 3rd, 1919 issue of "The Pigeon Progress" newspaper of Pigeon, Huron County, Michigan as follows:
"Frank Henry Sherke (note this wonderful spelling!!) Was born April 17th, 1998 (well, the typesetter was obviously having a Murphy's Law day!! Ouch!) At Honolulu, Hawaiian Islands as son of Charles Scherke (yep, another and different spelling!) and his wife Charlotte Grindermann. In 1903 he came with the family to San Francisco, Cal. where they resided about eight years.  In 1911 the family came to Michigan and lived here ever since on different places near Owendale working beets and doing farm work on rented farms.  Two years ago Frank went to Detroit where he was employed as street car conductor but could not hold his position on account of poor health.  He came home sick last winter and had been suffering from consumption ever since.  He died last Friday night at the home of the family near Gagetown.  He is survived by his parents, four brothers, two sisters and a stepbrother and other relatives.
His age was 21 years, 5 months and nine days.  The funeral was held from the home and at the church at Linkville were conducted by Rev. A. Deichmann last Monday afternoon. The remains were laid to rest in the cemetery of the Ev. Luth. St. Paul's church."

Note that mention of a step-brother as a survivor, I have always felt that the step-brother is August Gruenwald. Despite the fact that we are pretty sure that August is alive in 1919 he has not been found on the 1920 census index.

In fact, nothing further has been found about August.  No other census, no Lutheran church records in Hawaii or stateside, no marriage, no death, no ship's manifest listing from Hawaii to the mainland.

Where did you end up August??  What name did you go by??  August, Gus, something else?  Gruenwald, Greenman or something else.  I have seen that surname spelled so many different ways I've lost count!  We all know spelling don't count.  But, dear, dear August, I have to have SOMETHING to work with here!

WHERE DID YOU END UP??

*** I use many resources to research, FamilySearch.org is a free site.  Ancestry.com is a pay site for which I pay, no discounts, etc.  None of these sites have asked me to review them, or use them.  See my Disclaimers page for further details.