THE Trip, THE Encore' :: Kennedy Gold Mine, Jackson, California.

April 27, 2013   As a reminder, Reflections is almost 3 months behind the real time visits. 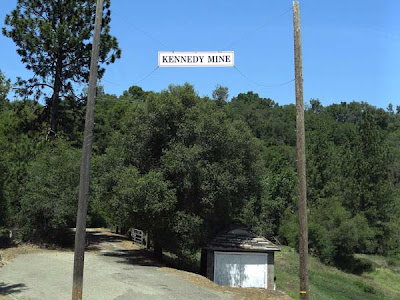 We were in the heart of Gold Country California!  I could almost hear the crys, "there's gold in them thar hills".

Man has a second great-grand aunt (let's just say great aunt to keep it simple) whose hubby was infected by the Gold Rush fever, so, a visit to Gold Country had appeal to me.  The ability to combine history, our travels and my family research is such a WIN!

I have not written about this family or the Gold Rush or the effects on the family yet here on Reflections, some day, I must, write in detail, but, here is a quick and dirty summary. 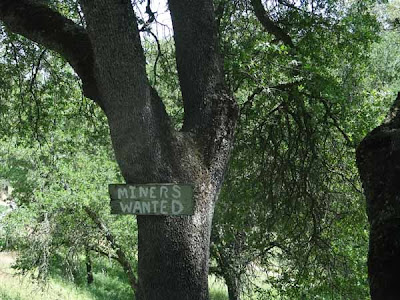 From what I know about Benjamin Jaquis, I don't believe he worked for one of the big gold mining companies like Kennedy.  In 1853 he wrote back home to family living in McHenry County Illinois from "Oregon Gulch, Bute Co, California"  Family lore is that he mined a claim that an old and dying man told him about and gave him a map to.  Benjamin worked that claim, fighting dry conditions in the summer months (you need water for panning gold) and eventually sold the mine off to another miner.  The rest of Benjamin's story is tragic, in fact is somewhat a mystery, and is best left for another post.

Nevertheless, the pull of the tour of the Kennedy Gold Mine was strong for Man and for yours truly.  So, off to the Kennedy Mines we went.

The Kennedy Gold Mine is named for Andrew Kennedy, an Irish immigrant, who supposedly discovered an outcropping of quartz sometime in the late 1850's. The Kennedy Mining Company was formed in 1860 when digging of shafts began with Kennedy and 3 partners.

One very interesting out building was this one, the Oil Building. The building was used to store lubricating materials for various machines.  Seems no one is sure about the structure's shape as the architecture is a mystery. As you can see the volunteers that run this museum to Gold Mining are doing maintenance and repairs to this building. 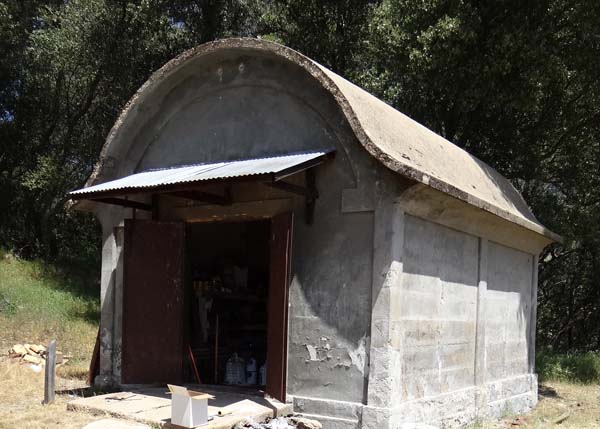 Before work the miners would change from street clothes to work clothes. After work they were required to take a shower.  This shower opportunity and changing of clothes was to prevent “high grading” (stealing gold).  The Change House is now a museum where the well versed docents explain much of the process of getting gold out of rock and many other facets of the world of gold mining.  This was in the Change House museum, and no, I cannot really tell you what it is, other than some sort of furnace.  Big, and looks like it would do a significant job of heating things up. 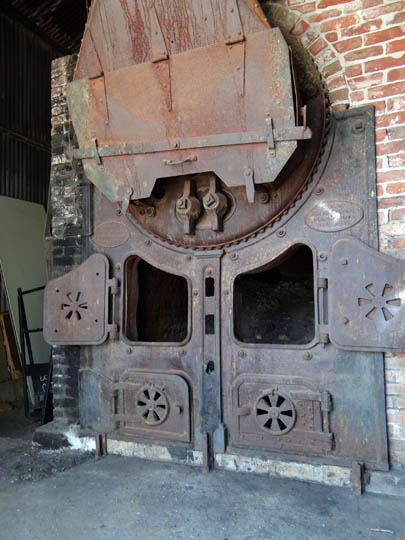 This is the "Headframe".  It is 125 feet tall, was built in 1928.  It contains the skips (best I can figure that means containers) which  raise and lower everything in and out of the mine including removing about 70,000 gallons of  water  from the mine shaft each day. There are hoppers to store rock and there is a rock crushing machine. 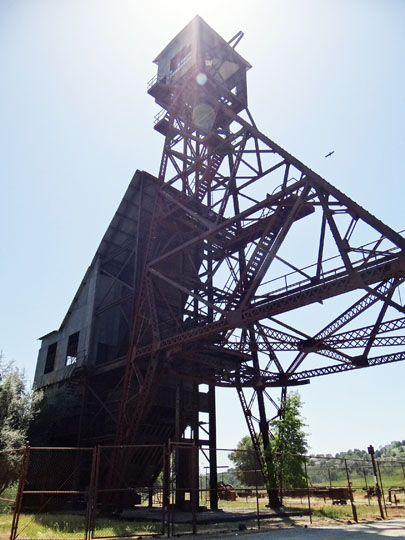 Some more HUGE equipment, I am in awe, even if I don't understand what it all does. 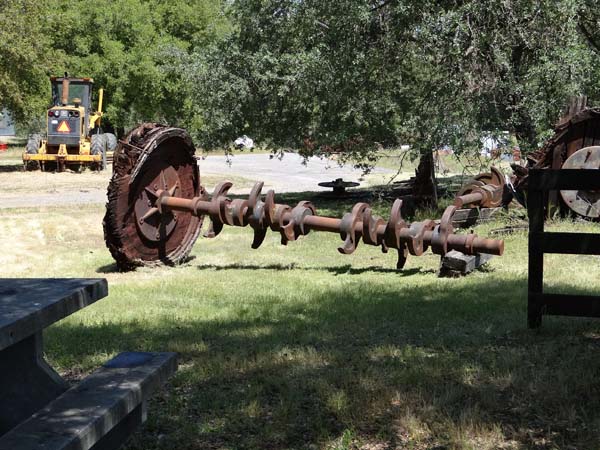 This building is the office building, now a museum as well. Kennedy Mining and Milling Office was built in 1907, it is a three story concrete building, that contained assay offices, general offices, the payroll office, and in the time before the company shut down there were 4 small bedrooms on the third floor for visitors. 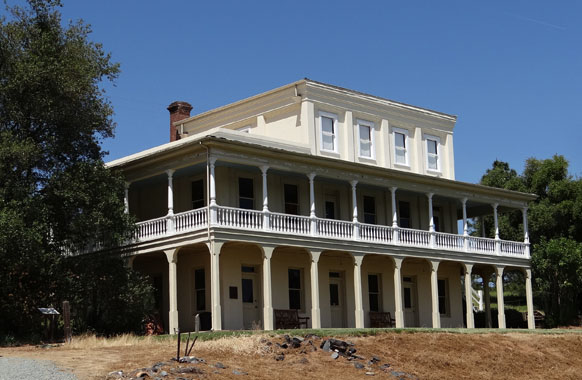 This is another oven/furnace, I don't remember if that was part of the assay office or part of the process to turn amalgam into solid gold ingots. 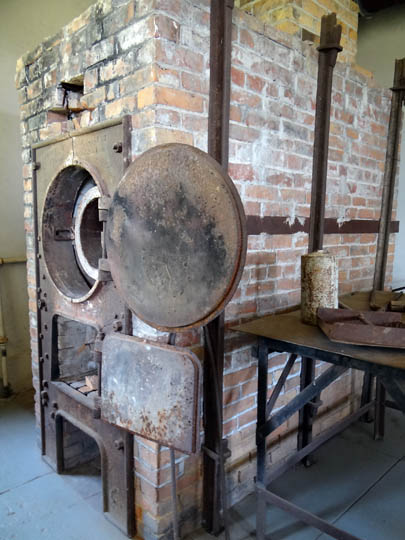 OK, someone who knows all about mining and gold, please tell me what this is??  I think it had something to do with the quality of gold? 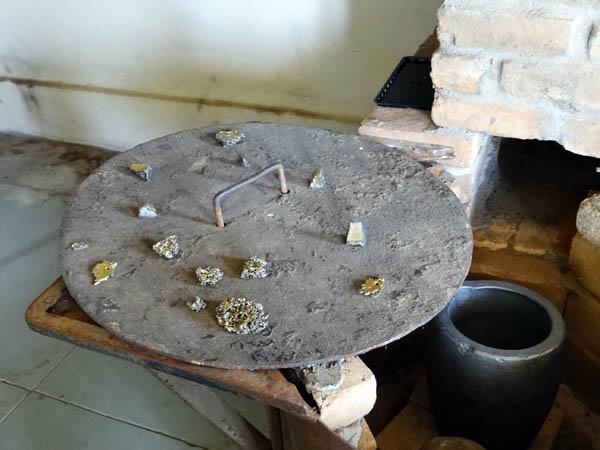 These rooms were decorated by The Mother Lode Questors to reflect rooms in homes may have looked during the hey day of the mine. 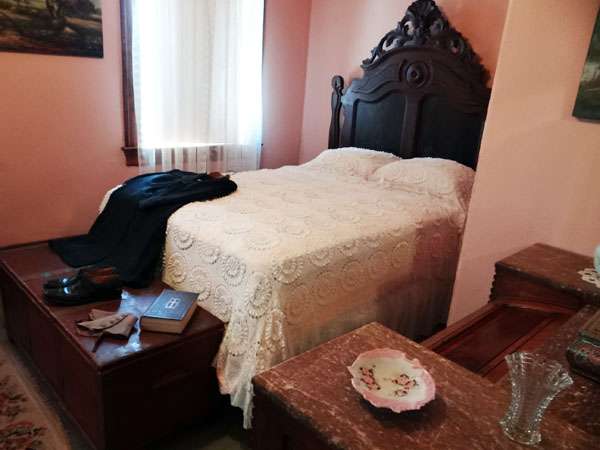 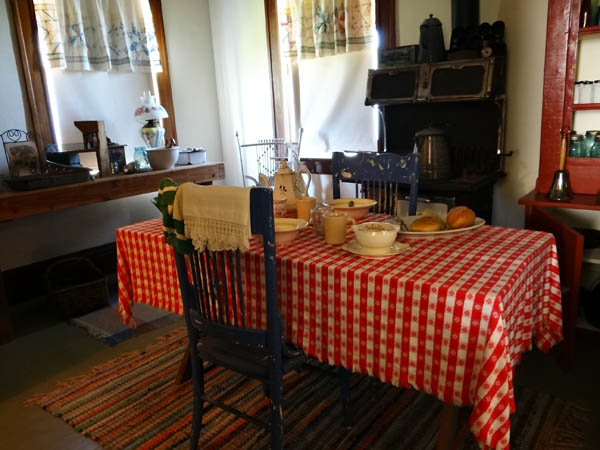 The docent that gave us our tour was very well versed in the mine, the buildings, the procedures required to bring gold up from the mine shaft and how to get gold out of all that rock.  It gave Man and I a great appreciation of the times and the business.  The mine produced close to 34.3 million dollars (when gold was valued at $20.67 and $35.00 per ounce).  The mine closed in 1942 when the U.S. Government closed gold mines as they were not essential to the war effort.

If you are interested in learning more about the Kennedy Mine (for example, it is one of the deepest gold mines in the world at 5912 feet),  their web site is here.

You were practically in my backyard! I wish I had known, we could have met for coffee or something.

Thanks for taking us on this tour Carol! Great pics, by the way!