This is week 21 of my participation Amy Johnson Crow's, once a week challenge to blog about one ancestor a week, tell their story, biography, a photograph, an outline of a research problem — anything that focuses on that one ancestor. More about the challenge can be found at her Blog, No Story Too Small.
Rev. Samuel Bowen was born Jul 16, 1659 at Rehoboth, Bristol County, Massachusetts to Obadiah Bowen and his wife, Mary (believed to be Mary Clifton).
He married Elizabeth Wood Wheaton on May 26, 1684 at Swansea, Bristol County, Massachusetts.  Elizabeth was the widow of Samuel Wheaton (a cousin of Samuel Bowen).
Samuel and Elizabeth had 8 children, some born at Rehoboth, Massachusetts.  Some traditions state that several of their children were born in New Jersey after their move there.

Samuel moved his family to Chanzey Precinct, Salem (now Cumberland) County, New Jersey.  The date of that move is reported as any time from 1687 up to 1703.  Just about every published family history I have checked has different dates for this move to New Jersey.  My direct ancestor, Clifton, son of Samuel and Elizabeth is reported to have been born in Bristol County, Rhode Island on Feb 12, 1700 (per James N. Arnold, compiler, "Vital record of Rhode Island: 1636-1850, Volume 6, Bristol County" (Springfield, Massachusetts: Springfield City Library, 1894).  It would seem to me that the move to New Jersey would have taken place after Clifton's birth.
There is so much conflicting information and conclusion out and about in research land it is quite befuddling.
Some examples from my notes on Samuel:

The Cumberland Patriot, published by the Cumberland County Historical Society, in the Summer 1981 issue tells of the Baptists moving to New Jersey.  "In 1687 and 1690 there were two migrations from Swansea, Massachusetts under the leadership of Rev. Timothy Brooks, a Seventh Day Baptist minister. The Welch Bowen's and  Barrett's were in this company.  The Swansea Company built a log meeting house a short distance west of the crossroads at Bowentown...In 1710 the Bowentown Baptists...united with the Cohansey Baptist Church."

In her work "350 Years of American Ancestors, Thirty-Eight Families, 1630-1989" by Mary Coates Martin, 1989 she tells of Samuel's move: "Reverend Samuel Bowen came to West (South) Jersey with the Rev. Timothy Brook's company and established the Cohansey Baptist Church as early as 1702. This settlement came to be known as Bowentown."
In a letter dated Sept. 11, 1962 to Mrs. Dempsey M. Stanley and provided to compiler by Patricia Orr in 1994 from Seventh Day Baptist Historical Society it is noted:  "The Shiloh Seventh Day Baptist Church did celebrate its 200th anniversary in 1937.  A mimeographed history was prepared at that time....The early history for this volume was written...John H. Bonham...Mr. Bonham states that Samuel Bowen ...had 8 children...removed to  Bowentown with the Timothy Brooks' Company...Mr. Bonham mentions a booklet printed in 1927 entitled "Timothy Brooks and His Descendants" by Robert Peacock Brooks."
Shirley Bowen Elders states in her book "My Bowen, Barton, Harris, Scott, Hendon, Cranford Family Connections", 1994:" Sometime between Feb 12, 1700/01", (that being the birth of Clifton) "and Dec 30, 1703, very probably in 1702, Samuel Bowen, his wife, their children, and Elizabeth's two sons, Jonathan and Noah Wheaton, moved from Rhode Island to New Jersey with his sister, Hannah, and her husband, the Rev. Timothy Brooks...."  Note that Dec. 30, 1703 is the date of a deed conveying a tract of land from Rev. Timothy Brooks to Samuel Bowen.
At any rate, Samuel and his family moved to New Jersey, where they practiced their Baptist religion. According to William B. Saxbe, Jr., CG, FASG, in his 2011 work "Richard Bowen, (1594-1675) of Rehoboth, Massachusetts, and His Descendants, Volume 1 - Generations 1 - 3....", published by the Rhode Island Genealogical Society in 2011; on page 269, Saxbe tells us, "Samuel assumed the leadership of the Sabbatarian [Baptist] church at Bowentown after Timothy Brooks moved to the Cohansey congregation, and was the "colleague for many years of the first pastor, Jonathan Davis Sr. [of the nearby Shiloh Baptist Church].
Below:  Photo taken from "The New Jersey Genesis", Volume 12, Number 3, April 1970, states original photograph was taken by the "Editor", in 1929.  He writes:  "Plastered, brick house at the northwest corner of the crossroads in Bowentown, Hopewell Township, Cumberland County, New Jersey.  The high part was built by Jonathan Bowen, Esq., about 1760. His grandfather, Samuel Bowen, from Rhode Island, died on this farm in January 1728/9.  It is believed that a part of his house is incorporated in this building. 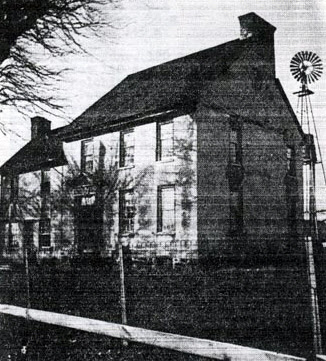 Samuel died on or about  the 21st of January 1728. Per, "Salem County, New Jersey, Genealogical Data, Records Pertaining to Persons Residing in Salem County Prior to 1800", compiled by H. Stanley Craig, Samuel Bowen, of Cohansey, will dated 1/21/1728-29, probated, 3/4/1728-29.  Children named were John, Dan, Elijah, Clefton, Mary Persey and Elizabeth Fogg.  See Liber 3, page 25.  I obtained a copy of this will, the copy is very poor, many black areas, which appear to be tape used to repair the original pages, now photocopy black, which obscure the text of the will and accompanying papers.
The will of Samuel Bowen of Cohansey in the County of Salemstates: "Desires a Christian  burial".  Leaves gifts to sons John, Dan, Elijah, Cleffton, Elisabeth Fogg, Mary Persy (that is how this compiler sees her married name spelled).
An inventory of Samuel's estate was done on January 21, 1728 by Job Shephard and Timothy Brooks and submitted to the court on March 4, 1728.
There is a memorial for Samuel at Find A Grave which indicates he was laid to rest at the Cohansey Baptist Church Cemetery, Roadstown, Cumberland County, New Jersey.
Wish list for Samuel Bowen:  A better copy of his will, verification of burial at Choansey Baptist Church Cemetery, photo of any headstone (requested at Find A Grave today).