This is week 22 of my participation Amy Johnson Crow's, once a week challenge to blog about one ancestor a week, tell their story, biography, a photograph, an outline of a research problem — anything that focuses on that one ancestor. More about the challenge can be found at her Blog, No Story Too Small.

Ann Newcombe was born Jun 30, 1793, give or take.  Her birth date is figured from the age at her death and her death date, as inscribed on her headstone (more on that later).  We believe she was born in Devon(shire) England.

Given these dates, one is directed to a christening record found via LDS IGI, from church records extracted, for the christening of Ann Newcombe, 7 July 1793 at West Putford, Devon, England, father Thomas Newcombe, mother Mary.

On September 6, 1814 Ann married Richard Lashbrook at Thornbury, Devon, England.  By 1830 they had 10 surviving children born and baptized in Devon(shire) England.  By 1832 the family, Richard, Ann and all those 10 children, left Devon via Quebec Canada and had arrived in or around Clinton County New York.  They had two more children born in New York that survived, and possibly two more that did not, but are named by other family researchers.  Nothing further is known about those two possible children, except that they were supposedly named Jacob and Elizabeth.

Sometime in the early 1840's the entire Lashbrook clan, Richard and Ann and all 12 children with several in-laws/spouses and some grandchildren, left upper New York and moved, lock, stock, and barrel to McHenry County Illinois where Richard and Ann lived till their deaths.

Ann left no will, however there is a probate case in McHenry County, Illinois to settle her estate. Of special interest are the following bills that were paid to settle her final affairs:

Total expenses paid by the administrator of Ann's estate was $375.00, plus $60.00 administration fee.  Each of her heirs (children) received the sum of $46.64 in settlement of the estate.

(Below is my take on the legal papers, I am no lawyer, that is the disclaimer, meaning, I could have interpreted the papers wrong.)

The event of Ann's death before her husband's estate had been settled presented some legal problems for the administrators of both estates. There were several lengthy legal documents, court cases, orders for court appearances, and requests for re-appraisal of Richard's estate. Richard in his will had given the use of the house in town to Ann for the rest of her life and the cash amount of $4,000.00 for use towards her expenses for life.  The problem seems to stem from the fact that there was not $4,000.00 cash to give to Ann for her usage.  Richard's estate consisted of two pieces of property (including the house lot) and several outstanding loans due him.

The administrator for Richard's estate had not sold the second piece of property, nor fully collected the loans due him by the time Ann died,  therefore he had never given Ann her $4,000.00.  What he actually did was to pay several bills for Ann's food and care out of Richard's estate.

When Ann died the executor of her estate had no funds with which to pay her final bills.  He filed a court action demanding the $4,000.00 Ann was supposed to have received.  Richard's administrator argued that he could not raise that amount, and indeed he had no right to sell the house lot.  He asked the court for permission to sell the lot.

There was another factor coming into play here, Richard had left each of his children stated amounts of money, to be paid at certain intervals.  For example, Moses was to get $800.00, payable over 4 payments of $200.00 each, one payment due one year after Richard's death and the next 3 payments one year apart after that.  After all these legacies were paid, final expenses paid, and Ann's portion laid aside, if there is residue, that residue is to be paid in equal amounts to the children.

Ann died without a will, therefore from what I can make of the legal papers filed, after her final expenses were paid, any balance would be split between the children in equal amounts.

If it sounds confusing, I agree (again since I am not a lawyer). However, by studying the final accounts it appears that: 1.)  The court ordered the sale of the house lot.  John Lashbrook purchased it for the sum of $1,000.00.   2.)  The $1,000.00 was paid to Ann's administrator, who now had funds to pay her final bills and a little left over to distribute to each child, share and share alike, each child receiving $44.64.  3.) One piece of  Richard's property was sold Nov. 27, 1883 for $2,612,00 (interesting that the executor calls this property a "store") and that sum along with other funds from rents, interest, cash on hand, etc. was used to pay Richard's final bills, and the legacies to his children.  These legacies were paid in December 1883 and January 1884.  It is not clear to compiler if the "store" was the other piece of property or perhaps was on the same piece of property that the house was on.

Ann was laid to rest beside her Richard in the Jerome Cemetery, Harvard, Dunham Township, McHenry County, Illinois.

In 2004 Man and I visited McHenry County Illinois and I did a nice bit of research.  We also visited a number of cemeteries in the area, including the Jerome Cemetery.  The Lashbrook monument was extremely hard to photograph and I resorted to carefully placed artist paper to get a rubbing of the inscriptions.  Rubbings are not acceptable to many researchers and cemetery buffs.  There is a good reason for this, it has been discovered that the practice can result in serious damage to stones.  For this reason, chalking, scrubbing, scraping, and flouring stones is also considered a no no.  However, we did a rubbing.  And, the only photographs we did that we could see the inscription was with the rubbings.  Here is Ann's.  Note the farm fencing pole that is being used to keep the stone in an upright position.  SIGH. 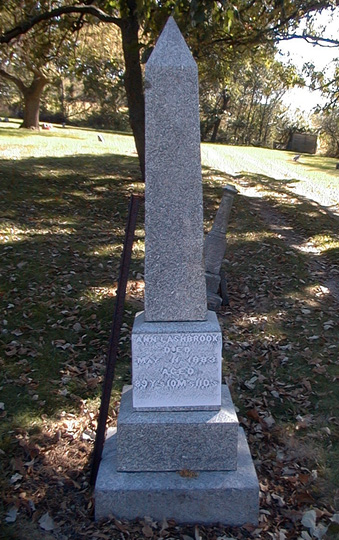 Wish list for Ann (nee Newcombe) Lashbrook:  Prove her parentage.  Photo of Ann.  Obituary for Ann, despite several searches, including checking each local paper we could find on microfilm during our visit to McHenry County, no obituary has been found.